Popular Posts
BREAST SUCKING; IS BENEFICIAL FOR ADULTS.
The History of Ede town,the home of Timi...
LIST OF THE NEWLY ELECTED HONOURABLE MEMBERS OF...
BANIK greets Muslims at Ramadan.
Featured 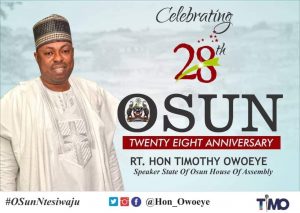 Osun is an inland state in South Western Nigeria that was created on August 27, 1991 from parts of the Old Oyo State. The state’s name is a derivative of the popular “OSUN RIVER” that is generally believed to be a physical reflection and manifestation of the Yoruba goddess “OSUN”. The people of Osun practice Islam, Christianity as well as their inherent ancestral religions. Osun is the ancestral home of the Yoruba race where the (Olodumare), the creator began the creation of life, civilization and world in general.

The struggle for the creation of Osun dates back as early as 1950 when the Western,Central and Eastern parts of Osun were merely subordinate towns under the administration of the Ibadan District Native Authority. The vision, resilience and determination of a group of political agitators facilitated the creation of nine states including the Osun division which adopted Osogbo as its proposed headquarters/capital.

Vision is the stronghold that reinforces the determination and hunger for success. The dream of the founding fathers of Osun State remain viable and prosperous regarding the present administration’s progressive contributions and efforts in the reassertion and vociferation of the guiding principles of our predecessors.

Relatively, just in few years of her existence, Osun has recorded a tremendous amount of achievement cutting across the geopolitical regions in the state, ranging from improvement in educational standard and livelihood, stabilization of the economy, provision of security and basic infrastructural facilities.

Arguably, with the exception of Lagos, no other state in the country can compete with Osun in terms of infrastructural development in primary and secondary schools. Osun State has concentrated a large amount of her resources in the provision of significant development to educational quality for her future successors. The provision of free meals to students in government owned primary schools is outstanding, exceptional and unrivaled. Thousands of pupils are fed on a daily basis through the “Osun Elementary School Feeding and Health Programme” which has also created job opportunities for young women who are professional food vendors.

The present government’s huge investment in infrastructure has suitably transformed the state into an enviable metropolis and urban centre. According to the National Bureau of Statistics, State of Osun has a reasonably high level of human development index through its multifarious empowerment schemes.

The State, in recent years has been putting up a giant stride on the menacing issue of insecurity. The past administration of Ogbeni Rauf Aregbesola made it a focal point and a vital agenda to make Osun, a terror-free State. Also, the efforts of the present administration under the leadership of Alhaji Gboyega Oyetola have been outstanding following its productivity in ensuring the maintenance of an uninterrupted flow of peace and order in the state.

Regarding the economic aspect, the state government has been relentless in its campaign to transform the image of Osun into an economic hub in terms of excellence in the agricultural sector in the country. This is a metrical attempt to empower and indoctrinate members of the youth into the agricultural system in a bid to improve the output of locally produced food items in the nation.

So far so good, no stone has been left unturned in the progressive development of the state, kudos should be given to the past administration as well as the present government for their bold steps in making Osun State an exemplary figure among her contemporaries.

Osun Has Grown In Leaps And Bounds, senator (Dr) Ajibola Basiru SRJ as he congratulates Osun At28.