Popular Posts
The Story Of Attah Ameh Oboni – the...
The state of Osun Anthem,Yoruba and English.
The Biography of the Alaafin Oyo his imperial...
Breaking News: Again, Ladi Adebutu Loses To Jimi...
Opon Imon (Tablet of Knowledge)Read this carefully from...
Education 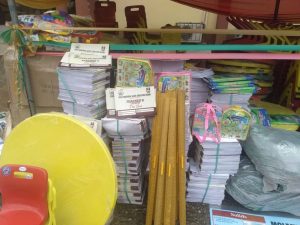 The Government of the state of Osun under the leadership of Governor Gboyega Oyetola has again distributed another batch of new teaching aids, instructional materials and sporting facilities to all elementary and middle schools in the state. 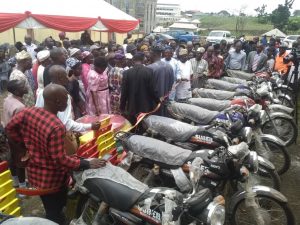 The distribution exercise which took place yesterday at the Conference of Hall of the State Universal Basic Education Board in Abere, Osogbo, the State capital had in attendance the Head of Civil Service in the State, Dr. Olowogboyega Oyebade, the permanent secretary, Osun SUBEB, Alhaji Fatai Kolawole, directors of the Board and senior staff of local government inspectorates across all the state including teachers and pupils.

The teaching and instructional materials contain different modern tools and items geared towards enhancing quality literacy and numeracy skills of pupils in both basic and elementary schools in the state while sporting facilities were also made available by the government to encourage pupils that are naturally talented to acquire and improve their life skills. 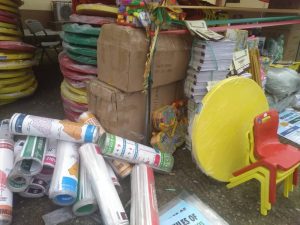 In addition, new sets of motorcycles was also distributed across all the local governments in the state to hasten proper monitoring of schools in remote parts of the state.

While speaking on behalf of Governor Gboyega Oyetola, the Head of Civil Service in the State, Dr. Oyebade Olowogboyega, commended the teachers in the state for the wonderful job they were doing and for promoting education in the state.

He assured the teachers that the administration of Governor Gboyegs Oyetola would do everything to promote them. He used the opportunity to inform the teachers in the state that by the end of this month, Governor Gboyega Oyetola would honour some teachers as part of the state government productivity day where different items would be given to some selected teachers who have performed excellently well in their responsibility as it was done last year.

Earlier in his address, the permanent secretary, Osun SUBEB, Alhaji Fatai Kolawole described the flag off of the new set of instructional materials and teaching aids as something the state government does periodically in order to ensure that instructional materials are readily available to facilitate teaching and learning process in government schools.

He assured parents and guardians that public schools in the state have qualified teachers and that the administration of Governor Gboyega Oyetola will continue to train and retrain the teachers to boost their productivity.

The Osun SUBEB helmsman described basic education as a precursor to stable nationhood that must be made available to all and sundry.

Speaking on the new approved policy of pre-primary education in the state in line with national education policy 1-6-3-3-4, the top education echelon said, “when you talk about education, the earlier you start the better because it is at the very basis, the rudimentary part that you acquire the first education, it is a question of catching them young, if you want to have a stable nationhood, then one must ensure that citizens are educated and that is the reason we decided that will need to go out and drum it to the ears of everybody that they should bring out their children and wards to government schools to be properly educated, he concluded.