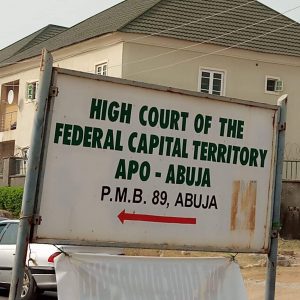 Osun State Governor, Adegboyega Oyetola, who contested the last governorship election on the platform of the All Progressives Congress (APC), has asked the Court of Appeal in Abuja to reverse the majority judgment given on March 22 by the Osun State election tribunal.
The tribunal had, by a majority judgment given by two of its three members, voided the election of Oyetola, pronounced Ademola Adeleke of the People’s Democratic Party (PDP) winner. It then asked the Independent National Electoral Commission (INEC to issue him a certificate of return,In a 39-ground notice of appeal filed on March 26, 2019 by his team of lawyers, led by Wole Olanipekun (SAN), Oyetola faulted the majority judgment, given by Justices Peter Obiora and Anyinla Gbolagunte, on the grounds that it was perverse, replete with contradictions and not supported by evidence led by the petitioners. Oyetola wants the Court of Appeal to uphold his appeal, set aside the majority judgment and dismiss the October 16, 2018 petition by PDP and Adeleke.

The governor said his complaint, in the appeal, was against the entire majority judgment, except where the tribunal held that it lacked jurisdiction to set aside INEC Guidelines; that the allegation of over voting was not proved; that the petitioners did not prove voided votes and other parts of the judgment where the tribunal agreed with their arguments. Oyetola is contending, in his first ground of appeal, that the entire of the majority judgment is a nullity because it was written and delivered by Justice Obiora “who did not participate in all the proceedings of the tribunal and who was not present when all the witnesses gave evidence.”He noted that Justice Obiora was absent on February 6 when the respondents witnesses (RWs) 12 and 13 – Ayoola Soji and Oladejo Kazeem – testified and tendered exhibits, which the tribunal admitted in evidence.

The appellant argued that, having not attended the tribunal’s siting on February 6, 2019, Justice Obiora could not see the two witnesses and was unable to examine their demeanour, as required, and therefore, unlawful for the judge to have authored a judgment in which he reviewed the evidence given by the witnesses. He said: “The writing of and or the participation of the Honourable Justice P. C. Obiora in the writing of the judgment of the lower tribunal of 22nd March 2019 and delivery of same, vitiates the entire judgment.”

Oyetola also argued the tribunal, in its majority judgment, erred in law and acted without jurisdiction when it accepted the petitioners’ complained of non-compliance with the provisions of Electoral Act in relation to the September 22, 2018 governorship election in Osun State and on that basis proceeded to nullify the victory of Oyetola and APC.

It was equally the appellant’s contention the tribunal acted without jurisdiction by basing its decision to uphold the petition and set aside the return of the appellants on the basis of allegation of non-compliance with the Electoral Act, in relation to the September 22 governorship election.

The appellant noted that, nowhere in the entire petition, did Adeleke and the PDP complained about non-compliance with the provisions of the Electoral Act in relation to the September 22, 2018 election.

He added that the only ground, in the petition, alleging non-compliance with the provision of the Electoral Act was in relation to the rerun election held on September 27, 2018.Oyetola noted the tribunal contradicted itself in its conclusion, in page 191 of the majority judgment, to the effect that the information omitted by the election officers in the Forms EC8A in the 17 polling units, where the tribunal voided results, were essential to proving over-voting.

He argued that, having earlier found that accreditation is not done on Form EC8A and that same (accreditation) cannot be proved without voters’ register, the tribunal was without jurisdiction to overrule itself.

The appellant further argued that the tribunal erred in law when it cancelled elections in 17 polling units on the mere allegation of improper ballot accounting and accreditation details.
He argued that since all the witnesses called by Adeleke and the PDP admitted that the voting process was regular; that votes scored by each party were publicly announced after counting and that the announced scores of parties were truly reflected on Forms EC8A tendered by petitioners, the tribunal was wrong to have proceeded to cancel results.Oyetola said: “All petitioners’ witnesses testified and admitted that petitioners were not short-changed regarding the scores recorded for them in each Form EC8A tendered, and that no addition of votes was reflected in favour of the appellants.
“The lower tribunal had rightly found that there was no over-voting; there was no voiding of valid votes; that accreditation can only be done through voters’ register; that no single ballot paper was tended before it.“By cancelling of elections in 17 poling units the lower tribunal acted without jurisdiction.

By deciding as aforesaid, the lower tribunal discountenanced Section 139(1) of the Electoral Act.”Oyetola also faulted the tribunal’s decision to void the rerun election when the petitioners did prove that there were elections in the seven polling units where the rerun election took place and that the results were wrongly cancelled.

The appellant also noted the petitioners did not call their agents from the affected polling units as witnesses; did not tender documentary evidence to show that it was the returning officer that unilaterally cancelled the elections.

Oyetola also argued that the tribunal acted outside its jurisdiction, erred in law and arrived at a perverse decision when it engaged in calculating and subtracting from election results to arrive at proclaiming Adeleke and PDP as being victorious.

He noted that by engaging in computation of votes, the tribunal allocated to the petitioners more votes than they claimed to have scored.The appellant noted that, while the petitioners, in their relief xviii, put the total votes of parties, after the deduction of the cancelled votes, at: APC 241,335 and PDP:246,634, the tribunal, in its judgment, after making its computation and deduction, allocated to the parties: APC 253,452 and PDP 253, 777.Oyetola argued that, where the petitioners failed to tender the press release they claim INEC issued in respect of the cancelled elections, and also failed to tender results from the seven polling units, the tribunal was in error to have acceded to the petitioners’ prayer to void the said press release.

The appellant also argued that the tribunal contradicted itself when, on the one hand, it nullified the rerun election of September 27, 2018, but on the other hand, went ahead to void the election of the appellant on the same election.He further argued:
“Having rightly held that it lacked the jurisdiction to strike down and nullify the approved Guidelines and Regulations for the Conduct of the Osun State Governorship Election 2018, made by INEC, the tribunal misdirected itself in law and came to a perverse decision by going ahead to nullify the rerun election.”
Oyetola also argued that the tribunal was wrong to have declared Adeleke winner of the election, held on September 22 and 27, 2018 on ground of non-compliance rather than ordering a rerun election.He noted that, not only did the decision disenfranchise the electorate in the affected polling units, it voilated the provision of Section 140(2) of the Electoral Act.

The appellant argued that, having admitted to have benefited from INEC’s alleged non-compliance with Electoral Act, by not filling some portions of the Forms EC8A, and asked that the results from those polling units be cancelled, they petitioners could not have asked the tribunal to declare them winners of the same elections.
He added the lower tribunal erred when it voided votes in 17 poling units on the basis of improper ballot accounting and record of accreditation on Form EC8A Oyetola argued that, since elections were concluded in the polling units; results counted and recorded in the appropriate forms, and no one contested the quantum of votes scored by the parties, the reasons given by the tribunal to void the votes did not affect the result of the election.
He added: “The lower tribunal wrongly disenfranchised the electorate in the said polling units after casting their votes and without any challenge to the scores generated from the voting exercise.
”The appellant prayed that Court of Appeal to dismiss the petition by Adeleke and PDP, for being unmeritorious and set aside the
majority decision of the tribunal, which he argued, “is against the weight of evidence.”

The Biography of the Alaafin Oyo his imperial Majesty Olayiwola Atanda Lamidi Adeyemi.