Popular Posts
The state of Osun Anthem,Yoruba and English.
The Story Of Attah Ameh Oboni – the...
King (Dr) Saheed Osupa 58 Albums between 1992...
Opon Imon (Tablet of Knowledge)Read this carefully from...
SB Daodu,The Loss of A Titan…SRJ.
Politics

The Orangun of Oke-Ila, Oba Adedokun Abolarin has described the candidate of APC in Osun Central Senatorial district, Dr Ajibola Basiru as a competent Politician who is morally and politically fit for the Senatorial seat. 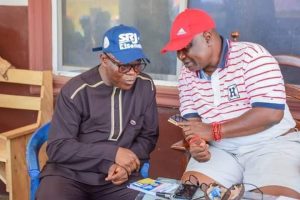 The Monach disclosed this while receiving the Campaign Team of SRJ in his palace at Oke Ila in Ifedayo Local Government of the State.

Oba Abolarin who was elated with various developmental agenda of Dr Ajibola Basiru said, there is no doubt in the candidature of SRJ as he described him as a competent politician, man of high integrity and a God fearing candidate.

The monarch who used the opportunity to appeal to government at all levels to always consider Oke Ila in all their infrastructural development projects, urged people of Osun central Senatorial district to support the right candidate for the good and qualitative representation.

Speaking at the Special Prayer and Endorsement program organized by Osun Positive Force, in Oke Ila, Dr Ajibola Basiru appreciated the endorsement by SDP, APC Members and other non political groups in Ifedayo,Ila and Boluwaduro. 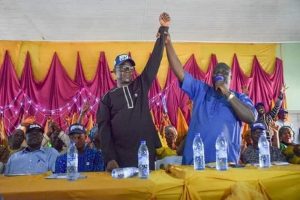 The immediate past Attorney General and Commissioner for Justice who lauded the proactiveness and Leadership quality of Chief Bisi Akande and other party leaders in the state stressed the need for party Members to improve in their political campaign strategy and embracing operation win your polling unit for all APC candidates in the February general elections.

Dr Ajibola Stressed that, he would embark on laudable,developmental and impactful projects across osun central Senatorial district.

While assuring the people of ila, Ifedayo and Boluwaduro of his commitment to their plight, Dr Ajibola affirmed total and qualitative representation at the senate,sponsoring of beneficial bills at the senate, establishment of vocational centres, provision of employment opportunities for graduates,regular medical treatment,and provision of infrastructural and developmental projects across Osun central Senatorial district.

They maintained that SDP & APC have unanimously agreed to vote massively for Dr Ajibola Basiru and other APC candidates in the 2019 eletions.

As part of SRJ’s respect for elders, Dr Ajibola Basiru thereafter paid homepage to the Orangun of Oke Ila, Oba Adedokun Abolarin where the monarch had received him and embraced his ambition to succeed Senator Adeyeye.

Highpoint of well attended endorsement program was special prayers by Alhaji Akeem Azeez and pastor sesan Jacob for the success of SRJ in the 2019 election.

How a 300level student of Adekunle Ajasin university was used as money ritual by her Yahoo boyfriend.