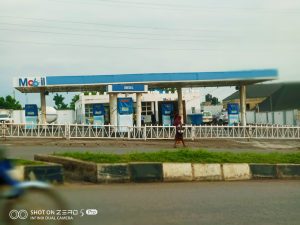 A petrol tanker that brought fuel for the new Mobil fueling station along Osogbo/Iwo road sparked off fire at the premises of the fueling station and everybody around the place started running helter skelter for safety.

Thanks to the federal fire service, which it distress number was called and they responded immediately to put the situation under control.

The people around this area would have started counting their loses now in term of properties and lives should the fire escalated beyond the area because there is another fueling station immediately after the fueling station where the fire emanated from.

With the establishment of the federal fire service in the state of Osun,we have again moved to the next level in term of security.

Kudos to the brain behind this in our dear state