A petition titled “Petition on the abandonment of the Osogbo Steel Rolling Company and the Nigeria Machine Tools Limited and an appeal for a drastic and immediate action to be taken on their rehabilitation” was today 10/12/2019 presented to the Senate by Senator Surajudeen Ajibola Basiru. 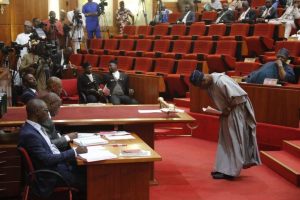 The Petition signed by Engineer Maruf Bolarinwa and Elder Adewale Adewumi was written by the Egbe Osogbo Oroki Parapo on behalf of the people of Osun Senatorial District.

While presenting the Petition to the Senate, Senator Ajibola Basiru stated that it was brought pursuant to Order 41 of the Senate Standing Orders 2015 as Amended and went on to give a highlight of the Petition which prays for an urgent consideration and intervention by the Senate for the reversal of the sordid fate that has befallen the Osogbo Steel Rolling Company and the Nigeria Machine Tools Ltd. located in Osogbo. It is with great sadness in our hearts that we write you on the degeneration of these two hitherto foremost factories into states of total neglect, disrepair and their inevitable obsolescence if the neglect continues in the hands of the new owners of the factories who came into their possession after the privatisation exercise carried out by the Federal Government through the Bureau of Public Enterprises (BPE) several years ago. 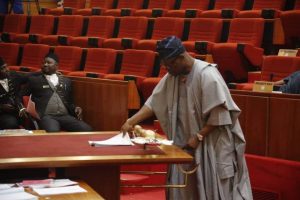 According to the Distinguished Senator representing Osun Senatorial District, the two factories that were established with the full potential of giant monopolies with the Nigerian industrial engineering sector as the captive market and the African regional market as the expansive frontier. The concept envisaged that entire engineering and capital goods industries in Nigeria require steel and machine tools that would produce heterogeneous parts or components into final machines that could transform basic materials like metal, wood and plastic into finished products have been laid to waste.

According to him, “It is very sad that some “special species” of Nigerians found their way to the pinnacle of leadership and ensured that all monies earmarked for the development of the two industries in Osogbo ended up in the evil pot of corruption for purposes other than developing the industries and expanding the economic base of host community of Osogbo. The people of Osogbo and Osun State, especially the youths are seriously suffering the consequences of this and all of us are no longer at ease including those that mismanaged the funds and other resources meant for the two industries. As a result of all these corrupt and unpatriotic practices, all the efforts made by patriotic Nigerians in Government for putting Nigeria in the Steel and Engineering Map of the world failed woefully. Unfortunately, it is still failing today leaving most Nigerians with the will to develop the Nigerian Steel, Engineering Industry and local economies in Nigeria confused and disorganized.” 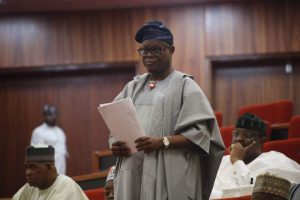 The Petition prays the Senate, as recommendations to;

i. revisit the Report of the Ad-hoc Committee on Privatisation during the 7th Senate and find out among other issues, why it has been “buried” over the years;

ii. carry out, in conjunction with the National Council on Privatisation, a forensic and careful scrutiny of the activities of the BPE in the privatisation of NMT Ltd. and OSRC and also review all the Terms and Conditions of sale of the two factories to Bronwen Energy Trading (Nigeria) Ltd., and Dangote Integrated Steel (a division of the Dangote Group) respectively to see if the factories and all of its holdings were not undervalued to favor certain interests and shortchange the Nigerian Government. Also, the local content components of the Share Purchase Agreements executed with the Core Investors for the two factories should be critically looked into;

iii. find ways, under the imbued power of oversight of the Senate, to remedy the current situation of the Osogbo Steel Rolling Company and the Nigeria Machine Tools Ltd. from an almost imminent collapse from the grips of inept, insensitive, incompetent and unpatriotic investors whose main motive is not the interest of the good people of Osun and Nigeria at large; and

iv. cause an inquiry to be made into the activities of the Core Investors from the date when they were put in possession of the industries till the present moment, the focus of such inquiry should be hinged on whether the project objectives as envisaged by the Agreements are being or have been actualized and whether also the Core Investors possess the fiscal means or the capability to make the two industries fully productive or competitive among similar industries globally.

vi. Please, it should be noted that Osogbo Community freely donated Land to the Federal Government of Nigeria for the purpose of siting OSRC and NMT Ltd. in Osogbo. The two core Investors should be restrained from selling any part of the land.

The Petition was later referred to the Committee on Ethics, Privileges and Public Petitions by the President of the Senate.

Presidency responds to the Punch news papers, says it is another testimony to press freedom in Nigeria.