Popular Posts
The Story Of Attah Ameh Oboni – the...
LIST OF THE NEWLY ELECTED HONOURABLE MEMBERS OF...
The state of Osun Anthem,Yoruba and English.
King (Dr) Saheed Osupa 58 Albums between 1992...
Teju is a Natural Leader – Rauf Aregbesola.
Politics

State of Osun chairman of the All Progressives Congress (APC), Prince Gboyega Famodun, has frowned at the misrepresentation of fact and deliberate twisted story purported to appear as if the state Governor Gboyega Oyetola, himself and some other members of his cabinet were attacked during the cross-over service at the Nelson Mandela Freedom Park, Osogbo, at the early hour of January 1.
Famodun who was visibly disappointed by the publication of the story stated that it was a product of fallacy willingly orchestrated by enemies of peace for no any reason other than mischievous intention. 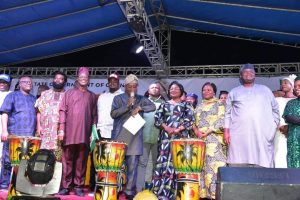 The state party chairman in a statement issued by his Media Consultant, Kola Olabisi, in Osogbo this morning said he was shell-shocked that some journalists could base the filing of their stories on rumour in order to discredit their target for reasons which could not be in the intetest of the prevailing peace and tranquillity under the administration of Governor Oyetola.
Famodun disclosed that as a participant-observer in the cross-over service, he could not fathom any time that the governor or any member of his cabinet and himself were attacked.
He stated that the imaginary attack only existed in the imagination of its peddlers with obvious pungent intention to lower the popularity of the performing Governor Oyetola.
The Igbajo-born APC state chairman hinted that whatever the mission of the cooked-up story was, it had only succeeded in hitting the rock on arrival as there could not have been any reason to attack the governor who is working day and night to lessen what might constitute the burden of the people of the state.
In his words: “There cannot be any basis to attack Governor Oyetola who is reputed for giving the people of the state qualitative governance.
“The reason adduced for the cooked-up attack defies logic as there cannot be a basis for attacking the governor who has prioritised the welfare of the governed despite all odds.
“It is on record that Oyetola’s government has been paying full salaries to the state civil servants since its inception as and when due while some of the inherited on-going capital projects like road construction/rehabilitation are also being attended to with adequate attention been giving to primary healthcare delivery programme in all the wards across the state”, Famodun explained.
The state party chairman was surprised when a minor disagreement between two urchins at such an annual gathering could be equated to attack of the governor and some members of his cabinet.
He enjoined journalists to always double-check their stories as the third estate of the realm and strive to do away with slaughtering of objectivity on the altar of subjectivity.
Famodun also cautioned newsmen to always desist from being used by disgruntled, expired and frustrated politicians who may come from any of the divides whose intention is to give a dog a bad name in order to hang it.
“Whoever could be behind the imaginary attack on Oyetola, some members of his cabinet and myself should know that they have scored monumental failure in this inglorious and non-dignifying political venture”, the state party chairman explained.
Famodun also disclosed that the governor had successfully ushered in the people of the state into the New Year before the urchins among the unprecedented massive crowd that graced the occasion created the scene among themselves.
He stated that the massive turn-out of the people on the occasion was an attestation of Oyetola’s popularity in the state.

We are bringing back defectors from Osun APC; Senator (Dr.) Ajibola Basiru.

Prince Hakeem Oriyomi Ajasa! The Grand Coming of the 15th Oniru of Iruland by Kunle Oduah.