Popular Posts
The Biography of the Alaafin Oyo his imperial...
“Egbedore state constituency 2023 and payback”
Hero-worshiping senator Ajibola Basiru Agbada caught in a...
The state of Osun Anthem,Yoruba and English.
Press Release; El-ZakZaky may return back to Nigeria.
Gists 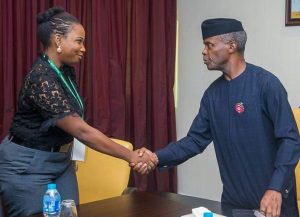 It takes an intuitive, engaging, analytical mind and high sense of imagination to truly understand and appreciate the beautiful mind of a man like Osinbajo who in his capacity as Vice President conducts himself responsibly and dutifully.

Close associates and those who have personally encountered him can attest to the fact that he is stickler for hardwork, passionate about service to humanity and a trusted ally and team leader. Even those who disagree with him can hardly question his intellectual strenght, moral uprightness and capacity to deliver on tasks assigned to him.

Above all, when we carefully peruse the minds of Osinbajo’s students and those he has led in the house of God before he became the Vice President, we will come to attest to the professor’s sense of purpose, humility, godliness, loyalty and brilliance.

Amazingly, Osinbajo’s family is an epitome of humility, godliness with full of simplicity worthy of emulation.Teach your children humility, contentment, respect and the fear of God; they will not depart from them when they grow up, so say the holy book. These are the fine attributes that define the man Osinbajo.

Meanwhile, one of the qualities of Osinbajo that is dazzling to mind is his undeterred and unfettered emulative spirit that is unattractive to little minds. The ingenuity he brings to bear in handling crucial state matters is top-notch and has made him the darling of most Nigerians.

Given his deep understanding of life, Prof. Osinbajo scorns the finer things in life and ensconces himself in moral values, frugality and simplicity. He carried out the business of government with much candor, respect and to the admiration of all. Check out the ease with which he relates and interacts with market women, traders and Nigerians alike.

There is hardly any part of Nigeria that Prof. Osinbajo hasn’t visited in the last three years. He sees nothing wrong or difficult in leaving his comfort zone to fraternise with Nigerians across states, towns and villages.

Truth is, apart from Osinbajo’s managerial skills, pastoral and leadership qualities, this erudite lawyer and professor is a frugal and disciplined family man who’s always in tune with the reality and existentialism of everyday life.

Vice President Yemi Osinbajo’s urbane nature, pristine academic and professional backgrounds, patriotic disposition, love for God and humanity as well as his avowed determination to contribute to Nigeria’s growth are attributes that keep him far ahead of his contemporaries, both within and outside politics.

OUR SYMBOL HAS LAID LASTING LEGACIES IN STATE OF OSUN By: Dr. Desmond Ojumu

PHOTOS: We Have Left Everything To God, Say...