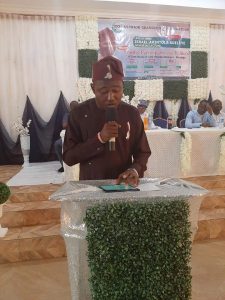 It is my pleasure to welcome you to the Public Lecture in commemoration of the one year remembrance for our late National Coordinator, Late Otunba Adeleye who died a year ago in the struggle for the second term of our President, His Excellency Muhammadu Buhari and his Vice, Prof Yemi Osinbajo.

Before I continue, May we all rise to observe a one minute silence for our emeritus coordinator.

May his soul continue to rest in Peace.

The Youths in any society are the engine of growth and development; because, they provide the labour force for production of goods and services to take effect. Therefore, the role of youths in national development and political growth is sacrosanct to the developmental aspiration of any society.

The development of any society is the interplay between man and his environment. This interplay that ensures self discovery plays a major role in energizing, conscientizing, motivating and mobilizing the people towards a common goal of good governance.

Although, there is no universally accepted definition of whom a youth is? However, in a way of making a personal conceptual clarification, “Youth can be defined as a period of when a person have strong stamina and passion leading to provision of optimum capacity for realizing certain set goals and objectives”. Also, the Youths share certain characteristics that distinguish them from other generations. Such characteristics include, impatience for change, zealousness, radicalism, curiosity, hardwork, ego and ambition etc. You will agree with me, that, these are the propelling factors for national development. 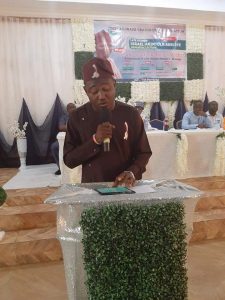 While national development is the general improvement in the lives of individuals, groups and environment. Looking at these two concepts, it is safe to say that, youths are the engine and actualizers of national development, if their mindsets are channeled towards right direction. Their actions and inactions are necessary impetus for entrenching and consolidating the vertical and horizontal integrations of any society or country like Nigeria.

The wheel of development of any country lies on the shoulder of how productive and creative the youthful populations are. For example, according to the 2006 census, the youthful population constituted over 70% of the population. With this quantum of population, it’s is a great asset for the Nigerian state if harnessed and utilized in the right direction.

*Where are Nigerian youths in today’s Politics?*

These set of factors has led to a situation in which Nigerians under the age of 35 are largely absent from government. But this has not always been the case. In the colonial era, young Nigerians led in the struggle for independence. As early as 1944, Nnamdi Azikiwe, still in his 30s, founded a political party the National Council of Nigeria and the Cameroun (NCNC). Meanwhile, Obafemi Awolowo Tafawa Belawa, Ahmadu Bello and Samuel Akintola, amongst many others in their 20s and 30s, rose to prominence through their activism.

After independence in 1960, however, this trend began to dissipate. The golden era was not replaced with new young leaders, and by the 1980s, there were only a few politicians under 40. At the same time, youth movements calling for democracy and human rights were forcibly clamped down by the military regimes of the day.

When Nigeria returned to multi-party democracy in 1999, there was optimism that the new system would prove more inclusive. But while youths hoped to be at the new vanguard of political progress, the political leaders practically closed all the opportunity to integrate youths to the political system, instead they were more often drafted to serve as thugs and henchmen for the same older political class and their children.

Young people’s significance in Nigerian politics diminished, and apathy grew. Today, of 36 Governor, 42 minister, 469 members of National assembly has less than 5% youths, while the voting population consist of 35% youths.

Interestingly, the transition of society from one generation to another is critical to the formative and developmental aspiration of such society. That, is why society that prepares their youth for the sake of future aspiration will not only secure her future development; but, will prepare her next set of leaders with the challenges of national reconciliation and development.

The youth are the cornerstone to societal rejuvenation. Societies are not only recreated through the youthful population, but, youth are often referred to as leaders of tomorrow. So, their mindset and roles is of major importance to the development of any society. So the youths have a greater role to play in politics. It has been suggested that Nigeria could by 2030 reap the benefits of what some called a “demographic dividend” if it invests now in human capacity development.

Unfortunately, these projections, expectations, and future forecasts, seem to be an abysmal blindfolded future, if the prevailing realities is anything to go by. The current state of the mind of Nigerian youth is not encouraging and doesn’t inspire confidence to participate in Nigeria politics.

It is my humble submission that, today, due to lack of opportunities and support based in the country, the only place of consolation for the youthful minds to showcase their talents and energy is in the enterainment industry.
Which to me is a great disappointment, minus and annoying to me as we continue to forecast future developmental aspiration of our dear country, Nigeria.

Entertainment though is a multi-million dollar sector in advanced countries, but, is a diversionary and idle sector for the pool of human resources and creativity that lie buried in the hands and hearts of Nigeria youth.

I believe, the Nigeria youth have more, than, entertainment to offer this great nation. The leaders, and society in general must understand, the miracles of development lies in the development of youthful minds and souls with knowledge and skills. Knowledge and skill have become the global currency of the world.

Unfortunately, there is no central bank in the world that prints such currency, except, leaders and societies device their own means of printing it, through harnessing and utilizing the energy, creativity and passion of their youth for national development.

Sure it is great to have oil and gas and other mineral resources, but as according to Schleicher, they only weaken society in the long run unless they’re used to build schools and the culture of long time learning.
Political leaders must channel their energy in harnessing and utilizing the energy and passion of the youth through positive means, not the current image of political thuggery, assassins, election riggers, bed warmers and prostitution.

A few years ago, it was almost impossible to talk up the chances of a youthful president in Nigeria. But now, the clamour for a young leader is gaining momentum with the signing of a bill that reduces the age limit to seek political office in the country.

Though, this amendment is not the principal challenge the youths are facing, but more importantly is the issue of skill, experience, and financial capacity limit.

More than half of Nigeria’s estimated 182 million population is under 30 years of age. The country’s median age is just 18, according to the United Nations, but politics is dominated by older politicians.
All civilian heads of government were more than 50 years old before they were elected. Nearly two decades after the advent of civilian rule, former military leaders retain a strong influence over politics.
We must encourage Nigeria youths to approach for increased participation in politics by younger Nigerians that are not intimidated with the presence of older politician.

I want to tell you that Nigeria and Nigerian politics requires fixing and AGF under my leadership is taking responsibility for fixing Nigeria to maintaining its identity as a citizen’s movement dedicated to democratic accountability, inclusion, and excellent public leadership, for good governance.

The older politicians keep power because the younger generation refused to rise up and take responsibility.

However, it has now become glaringly clear that there is a need for evolution of the new generation to replace the old because their policy proposals are not working in the i-tech age.

For us to regain our pride of place, we must work hard, generate ideas, resolve to joint efforts at emancipating the society as well as channeling focus towards initiatives that will aid for national growth and prosperity.

Otunba Adeleye sacrificed his life for the continuity of good governance in this country.

I want to plead with the present administration especially the Ekiti state government to immortalise Otunba Adeleye as an Honour such that his legacy which he sacrifice his life on will leave on.

I will always remember Otunba Adeleye advice that people of our tendency should fully engage in politics to make good representation of our society, rather than blaming political office holders…….. For “Power is not giving, but taking peacefully”
Otunba was a member several Nationa Youths organisation, amongs which are, :National Asociation of Nigeria Youths Initiative, members of Nigeria Youths parliament, All Progressive Youths Forum, and the National Condinator Of Asiwaju Grassroots Foundation.

He was a man of honour who always makes himself available when it comes to the role of youths in development of society and Nigeria at large.

I must emphasize that Otunba laid down his life to serve Ekiti state, agitated and fought for Nigeria youths to participate in decision making.

In conclusion, I want to urge Nigerian Political leaders to give Youths the opportunity to hold political power and offices to showcase our talents that we are indeed ready to lift this country to greater heights.

Thank You for listening.