Popular Posts
The Story Of Attah Ameh Oboni – the...
The state of Osun Anthem,Yoruba and English.
The Biography of the Alaafin Oyo his imperial...
Opon Imon (Tablet of Knowledge)Read this carefully from...
Breaking News: Again, Ladi Adebutu Loses To Jimi...
Featured 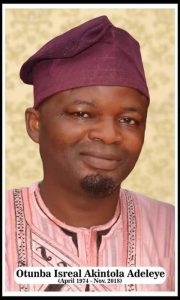 The Asiwaju Grassroots Foundation, AGF, has eulogised its former Coordinator, late Otunba Adeleye Akintola describing a year without him as the most trying period for the Foundation since its establishment.

In a statement by the National Coordinator of the Group, Com. Ishola Olateju in Abuja, Adeleye was described as a committed member of the Foundation, who in his lifetime, worked tirelessly with other leaders to take it to its present relevance in the Nigeria political space.

He said, “Otunba Adeleye lived his life to serve his people. His loyalty and commitment are never in doubt”.

Ishola, who said the Foundation, will continue to celebrate a patriotic former Coordinator, urged the Government and individual to assist the Foundation in setting up a foundation to take care of the family left behind by him.

Ishola also used the opportunity to appreciate those that have been supporting the family in the last one year, saying “only God can reward you all”.

The deceased former Coordinator died a year ago after he slumped in a meeting at Buhari/Osinbajo campaign Office Victoria island, Lagos to drum support for the second term ambition of President Muhammadu Buhari.