Governor Adegboyega Oyetola Saturday urged the people of Ondo State to ensure they re-elect Governor Rotimi Akeredolu in next month’s governorship election, declaring that “you don’t change a winning team. “ 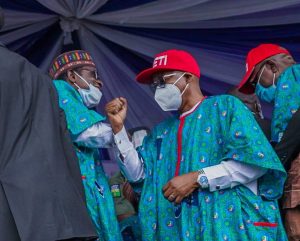 Oyetola, who led a strong delegation comprising his Deputy, Chief of Staff, Deputy Chief of Staff and some cabinet members to Akure, the Ondo State capital for the re-election campaign flag-off of Akeredolu, who is the All Progressives Congress, APC, standard bearer for the poll, noted that Akeredolu’s re-election will further engender socio-economic growth and development of the State.

Speaking with journalists in Akure, shortly before making his way to the stadium, venue of the rally, the Osun Governor, who had earlier met with the representatives of Osun indigenes resident in Ondo to rally support for Akeredolu, further said the Ondo Governor has opened up the State for economic prosperity. 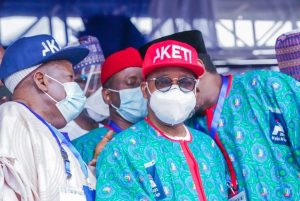 “We can all see the Ore bridge built by him and several other roads. The Ondo-Linyi Industrial Hub, Ore, I understand led to the employment of over 4, 000 persons.

“The Deep Sea Port, the process of which I understand has reached 80 percent, will further enhance the IGR of the State and would make the State less dependent on FG’s allocation.

“Akeredolu’s projects are set up to secure the future for generations yet unborn in Ondo State. And because you don’t change a winning team, l urge the voters in Ondo to ensure our party’s resounding victory at the poll, come October 10. In sha Allah, we shall return for the victory party after October 10,” he added.

Speaking on the defection of Agboola Ajayi from the APC and the party’s electoral chances, Governor Oyetola, who also doubles as the Chairman of the Contact and Mobilisation Committee of Ondo APC National Campaign Council, further said, “if you look at the APC in Ondo today, we are more united than we were four years ago.

“With all those who contested against Akeredolu four years ago at the primary with him today, I am confident that Akeredolu’s re-election will be seamless.”

STOP DOUBTING THE PREPARATION AND THE COMPETENCY OF OUR LEADER; DOJ charges detractors: