Popular Posts
Nigeria; the most prosperous black Nation in the...
Oyetola Commiserates With Buhari Over Abba Kyari’s Death.
Babatunde Desmond Ojo and Oriade state constituency: One...
Arsonists were Cowards, I lost 50m Worth of...
Fuel Subsidy Removal: The Needless Furore By Maryam...
Politics

Oluga, THE BEAUTIFUL ONE IS HERE* . By ADELEKE ADEOLA

*~Oluga, THE BEAUTIFUL ONE IS HERE* .
By ADELEKE ADEOLA

A philosopher once said, “When the going get tough only the tough get going”
The last Governorship election in the state of Osun shocked everybody that participated in the process, nobody knows the result will be so contentious, but the opposition gave APC run for it’s money and it take the grace of God for the ruling party to retain her number one position in the state, the result that came from Ayedaade, federal constituency will already discourage anyone who may have interest in contesting for election in the three local government that made up of the federal constituency. 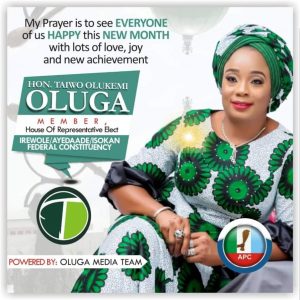 The presence of opposition big wigs is another threat to a potential contender.
The saying that, what a man can do, a woman can do better came to mind when Taiwo Oluga, former special advicer to former Governor of the state of Osun Ogbeni Rauf Aregbesola joined the race to the green chamber, she never leave anyone in doubt of her ability to mobilize party members and the masses for his party. Oluga, set out to win from day one and the result is out for all to see.
Taiwo Oluga, has build confidence in many young men and women who has been doubting their ability to aspire to political office, she is a role model to thousands of potential office seeker in the future not only in Osun but across the country.
While, we are awaiting the swearing of this fantastic honorable to be, I can vouch that the people of my constituency will not regret voting for this epitome of beauty, a humble woman and hardworking mother.
I can’t but wish her success as she represent us in the green chamber of National assembly.
Oluga, the beautiful one of Ayeedade federal constituency.
ADEOLA is the assistant secretary Progressive e Group.

The need to vote for Adelabu as the next governor of Oyo state by march 9th 2019.

fighting against corruption and I will not give EFCC order to release anybody’s bank account under investigation- President Muhammadu Buhari.