Popular Posts
North-West, South-West lead as INEC registers 96.2 million
BREAST SUCKING; IS BENEFICIAL FOR ADULTS.
The Biography of the Alaafin Oyo his imperial...
The biography of Dr Richard Adekola Idowu and...
June 12: A milestone for Democracy By Asiwaju...
Politics

No cause for alarm; i am still in charge, vice president Yemi Osinbajo dispels rumour of been sidelined.

The vice president, Yemi Osinbajo says there is no love lost between him and his boss, President Muhammadu Buhari because he still carries out duties as an executive vice president, including presiding over the monthly national economic council (NEC) meeting. 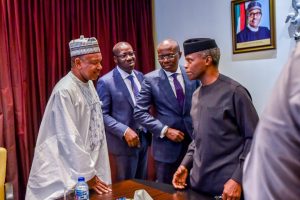 Osinbajo, whose loyalists felt he was being sidelined after the economic management team which he hitherto headed was dissolved by Mr. President and in its place an economic Advisory Council was formed and manned by renowned economists and management gurus in the country, like Prof. Doyin Salami who was the chairman, Prof. Chukwuma Soludo, Mr. Bismarck Rewane and a host of others as members. 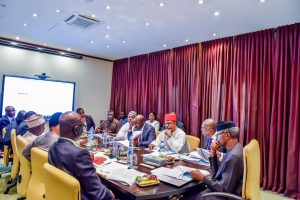 The vice president, who was reported to have presided over the monthly national economic council meeting on Thursday had made bold to say that there was no cause for alarm as he did not have any issue with his boss who he had worked directly under for over four years.
In a tweet by Laolu Akande, the spokesperson to the vice president, he had stressed that NEC was the constitutional body that advises the President on the coordination of the economic affairs of the country.
He maintained that governors, the Central Bank of Nigeria governor and some members of the Federal Executive Council were in attendance. He stated that records had shown that Osinbajo performed creditably well in that office. 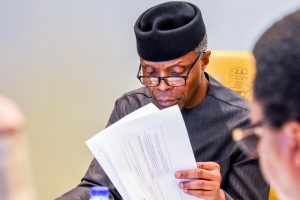 He said, “Vice President Yemi Osinbajo is now presiding over the monthly National Economic Council, NEC meeting with state governors, CBN governor and some members of the Federal Executive Council (FEC).
NEC is the constitutional body that advises the President on the coordination of economic affairs of the Nigerian federation. NEC under the leadership of Prof Osinbajo between 2015 to April 2019, passed 173 resolutions in 38 meetings. Some of them include the approval of $650 million seed funding as the Federal Government established the Presidential Infrastructure Development Fund.

“NEC also approved Community Policing in Nigeria as well as synergy among security agencies in a bid to improve intelligence gathering and end internal security crisis which included kidnapping. The Council approved the National Transformation Livestock Plan (NLTP) which was launched by the Vice President in Adamawa on September 10.
NEC under Osinbajo’s leadership approved Micro, Small and Medium Enterprises (MSME) clinics to help MSME with loans, materials and to make the process of doing business easy”, he said.

Chief Bisi Akande, i read him like a book,i study him like a course – Hon Tunde Lekan Olatunji.