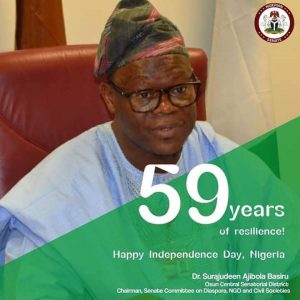 Our Governments at all levels and stakeholders at any stratum of administration must focus on youth development through education, employment, empowerment and skill acquisition to enhance independence and financial stability.

In a Statement from his Media Office,Senator Basiru observed that as long as change is inevitable and life is in phases and stages, Government and policy makers must take seriously the issue of youth engagement to arrest restiveness and sundry crimes prevalent in the society.

“It is about time we all as a Nation and Government stopped paying a lip service to youth development and did all worthwhile within our powers to build a better Nigeria by harnessing the potentials of youths,” the Senator emphasized.

The message noted that those who pivoted the nationalistic struggle in the 40s and 50s used their youthful blood to liberate Nigeria from the shackles of imperialism which eventually paid off in 1960.

The Senate Committee Chairman on the Diaspora also stressed the need for the Government to revive the power sector on which the economy rests,lamenting that several billion dollars sunk into the sector by the previous administrations have not brought results thus terribly depleting our productivity.

“The Industrial Revolutions in Europe and America which turned them World’s Super Powers were anchored on the development of the energy sector as the driving factor.”

“If the Power and Energy sector gets the needed push,many small and medium scale businesses that have become comatose will bounce back to their feet.But as things are now,many energetic Nigerian youths who want to stand on their own are still being disabled by huge amount of money required to start off and sustain such entrepreneurial efforts,” Basiru regrets.

According to the Senator,our quest for advancement in technology will only be a mirage if not powered by the Energy sector.

As the Nation celebrates its 59th Independence Anniversary, the Senator charged the Government not to rest on its laurels in securing the nation as insurgency and kidnapping still have some breaths in them to threaten our peaceful co existence.

Congratulating President Muhammadu Buhari,his cabinet, the National Assembly and the entire Nigeria on this anniversary, Dr Basiru sought people’s support and prayers for this administration as in unity lies strength.