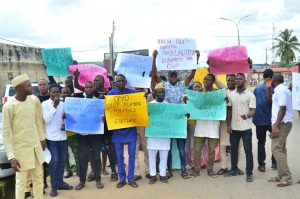 Following the lingering ownership crisis rocking the Ladoke Akintola University of Technology (Lautech), Ogbomoso, students of Osun state have called on the Oyo state government to do the needful, rather than resulting into blackmailing and propaganda. 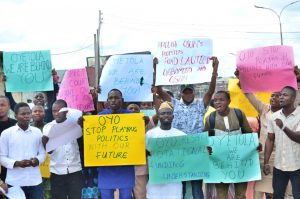 Armed with placards with various inscriptions , the students alleged the Oyo state government of its deliberate plan to fraudulently take over the university which according to them is jointly owned by both Osun and Oyo. 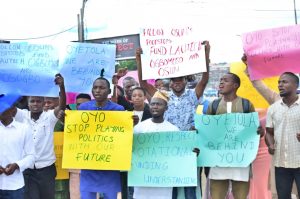 In a press statement jointly signed by Comrade Oderinwale Elisha, President of NAOSS and Comrade Abidoye Omololu , President of NANS/JCC Osun Axis, the students demanded that the two states should henceforth stop unnecessary blackmail and propaganda.

The students further warned that the states should respect the sacrifice of the heroes who laboured to establish the university by upholding the spirit behind the establishment of the school. 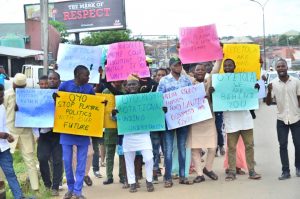 They emphasized that, the two states should follow the laid down pronouncement for division as clearly stated by the judgement of the supreme court in 2010, if they can no longer run the university.

The students said: “there is a deliberate attempt to blackmail and malign the government of the state of Osun over the purported arrears of salaries owed workers of Ladoke Akintola University of Technology, with a view to portraying our dear state as one that is not alive to its responsibility.

“Based on available records, we have since realized that Oyo state is trying to fraudulently take over what jointly belongs to two states. And students whose future is at stake here, we are compelled to weight in, first to set the records straight and to remind the Oyo state government that the supreme court had laid to rest how lautech’s divorce can be conducted. Should that be Oyo’s wish , it should simply follow the protocol and stop blackmailing Osun.

“We say so because records in the public space show clearly that it is the same Oyo state that has been sponsoring tissue of lies against our dear state that has not lived up to its responsibility over the years, especially concerning the funding of Lautech teaching hospital, Osogbo.

“In terms of infrastructure, of the eight faculties in Lautech, seven and half are located in Oyo state alone while only half is located in our our state. What of staff strength, it is 80 percent to 20 percent in favour of Oyo state. Again , even in students’ enrollment , it is in favour of Oyo state. But it is supposed to be joint ownership. Yet , we have this obvious lopsidedness. However, if in spite of the obvious lopsidedness, Osun has continued to be alive to its responsibility, without a corresponding reciprocity , then, something is wrong.”

You Must Hold Us Accountable: Senator (Dr.) Ajibola Basiru to electorates.