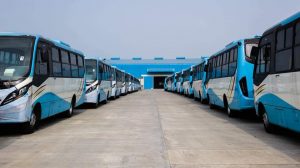 The Lagos State House Assembly has inaugurated a committee to begin probe of the administration of immediate past Governor of Lagos State, Akinwunmi Ambode over the purchase of 820 high capacity buses at the cost of N7 billion.

The Assembly, during plenary on Tuesday sets up a committee to investigate the purchase of 820 buses by the Ambode’s government.

According to the Assembly, it was important to investigate the purchase of the 820 buses out of the 5,000 buses proposed by Ambode for mass transit in the state, but which were purchased despite the refusal of the Assembly.

The motion for the probe was brought before the House by Hon. Gbolahan Yishawu (Eti Osa 2) and it was titled: “Lagos State House of Assembly Motion Number 2.”

According to Yishawu, the Assembly noted that at the Executive/ Legislative parley held at Golden Tulip in FESTAC in September 2017, the former governor informed the lawmakers that 5,000 buses would be bought by the state government, adding that the governor proposed to spend N17 billion to purchase the buses in the 2017 budget, but that this was not approved by the Assembly.

“In the 2018 and 2019 budgets, the state government proposed N24 billion and N7 billion respectively, but these were not approved. The state government still went ahead to import 820 buses at N7 billion, and out of them, 520 are still awaiting clearance at the ports,” he said.

Yishawu stated that the Assembly was worried that 520 buses were still awaiting clearance from the bonded warehouse and the Port, waiting to be cleared, and that they were purchased with taxpayers’ money without approval, urging the House to set up an ad-hoc committee to investigate all the issues relating to the purchase of the buses.

The lawmaker added that the Assembly should investigate the cost of the purchase of the buses and other issues surrounding the purchase to prevent a re-occurrence.

He disclosed that “N45 Billion would be spent on the total purchase of the buses and we need to prevent such an occurrence in the future.”

Speaking, Mudashiru Obasa, Speaker of the House, stated that there was need for the House to prevent waste because the expenditure had been done, adding that the vehicles were in the ports and that they had been there for almost a year.

He said the state would continue to suffer if the buses were allowed to stay in the ports, stressing that ” we should be the regulators of transporters, the state should not operate the buses. How much are we giving the buses out should be addressed. We should get the buses to the roads and safe the state from further wastes.”

However, the Assembly set up a committee headed by Hon. Fatal Mojeed (Ibeju Lekki 1) to look into the matter and report to the House in due course.

The Speaker ordered the committee to invite the Accountant General of the state, Permanent Secretary of the Ministry of Transport, and others that were involved in the purchase to state what they knew about the purchase.

He also told them to invite the current Commissioner for Finance, the Managing Director of LAMATA and others.

Speaking, Yinka Ogundimu, representing Agege 2 constituency said the House needed to investigate every transaction that had to do with the procurement of the buses, saying it had become a bad precedent if the House did not do anything about the matter.

“A huge amount of money still needed to be paid on the purchase of these buses. Whoever has erred should be brought to book,” he said.

In his contribution, Rasheed Makinde said it was obvious that the last administration did a lot of misdeed in awarding contracts, some of which, he said, Visionscape and the proposed fourth mainland bridge.

Osun Has Grown In Leaps And Bounds, senator (Dr) Ajibola Basiru SRJ as he congratulates Osun At28.