Monarchs hails Oyetola’s governance model, endorses him for second term …As SWAGA 2023 flags off in Osun.

Traditional rulers in the State of Osun have described the governance model of Governor Adegboyega Oyetola as one that is progressive and has service at its heart.
The monarchs also endorsed Oyetola for a second term in office, stating that it would be to the advantage of the State if there was no disruption. 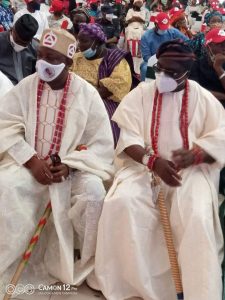 Speaking at the flag-off of the South-West Agenda 2023 in the State of Osun, the Oludo of Iddo Osun, Oba Aderemi Adedapo, the Secretary for the Council of Obas and Chief in Nigeria, described the performance of Governor Oyetola as one that has attracted attentions even at the federal level.
According to him: “We are not politicians, but when we have identified the right path to follow, it is only ideal and logical to follow that path and guide the people in our domain. That is only how we can enjoy the dividends of democracy and good governance.
“So, we are reaping from his ingenuity, and we desire his continuity after this current term elapaes”, Oba Adedapo stated.

He also called on the yoruba race to embrace the South West Agenda 2023, adding that the yoruba race is blessed with different grades of leaders who have what it takes to help the cause of the region and by extension the nation. 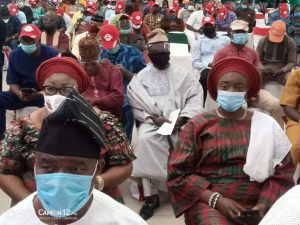 He continued: “We are blessed to have great leaders among the Yoruba. If you look at the trajectory of Asiwaju Bola Ahmed Tinubu, he has three main gifts that an Omoluabi should have.

“He is a strategic thinker, one with the privilege of foresight and of even temper. Secondly, he is a reliable man, one who has integrity, a rare virtue . Lastly, he is someone who always adds value to your life”, he added.

Corroborating these submissions, the Oluwo of Iwo, Oba Abdul-Rasheed Akanbi Adewale, described Governor Oyetola as one who is in government to serve and not for personal benefits.

“Asiwaju is an ideologist. He has made so much impact. He has built great leaders, people who are real servants of the land, one of whom is our own Governor Oyetola who has distinguished himself and made it crystal clear that all he wants to do is serve and nothing more”, Oluwo stated

Prince Adegboyega Famodun appreciated families,friends and well wishers on the 60th birthday of his wife.

SRJ: Taking Osun Central to the World By...