Many feared dead as Dangote truck ran in to BRT buss in Lagos.

MANY FEARED DEAD AS DANGOTE TRUCK RAMS INTO BRT BUS IN LAGOS. 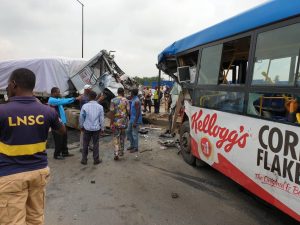 Many people were feared dead Tuesday as a loaded Dangote truck rammed into a high capacity BRT bus in Ikorodu, Lagos.

The truck reportedly skidded off the main express and then collided with the bus on the BRT corridor at Ogolonto area of Ikorodu.

“Casualties have been taken to the hospital,” Lagos State Transport Management Authority said, adding that the two vehicles have been removed from the expressway.

However, the accident caused a long stretch of gridlock outward Ikorodu.

“Traffic backlog has extended to Oja bus stop for those coming from Ikorodu. The backlog is at Asolo for those going into Ikorodu,” LASTMA said.

Some names and how they came about in Yoruba land.

Text of the press conference addressed by honorable minister of information and culture,Alhaji Lai Muhammed in Abuja,on Monday 26th of August 2019 on an English court rulings that P&ID can sieze $9.6 Billion in Nigerian assets over a botched contract.