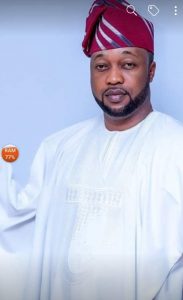 Hon. Olatunji however, regretted that, such millennium opportunity opened by technology was being consistently abused, by a cross section of the people, who orchestrate and spread spurious and erroneous information, induced by exuberance sometimes, while at others times doing the hatchet job of some unpatriotic elements.

The legislator however maintained, that “a conscientious and responsible use of the social media tool would bridge the gap of communication between government and the citizens, promotes service delivery, reduce cost of governance and lead the direction of good governance “.

This is the position of the Osun House of Assembly Chief Whip, in a paper presented at this year’s NANS week organized by the Joint Campus Committee, JCC, Ondo State Chapter held at the Federal College of Agriculture, Akure Ondo State.

In the paper which was presented by his Media and Public Affairs Assistant, Mr. Adenitan Akinola, the legislator pointed out the historical role played by the media in the evolution of Democracy world over and particularly in Nigeria, from the struggle against colonialism and military rule.

Hon. Olatunji argued that the realisation of the indispensable role of the media earn it the togga as the fourth realm of the estate, a development which had been incorporated into the constitution of most modern democracies of the world.

According to him, “Section 22 of the 1999 constitution which mandates the press, Radio and Television to hold government accountable to the people, also creates a space for the social media, when a clause of its provision adds..other agencies of Mass Media “.

The Legislator who represents Ife North State Constituency opined that, it had become more imperative than before, to regulate the social media space to avert the consequences of fake news prevalent on the social media, which has the potency of plunging the society into needless and avoidable crisis.

In this regards, Mr. Olatunji called for legal framework that would make individual mobile line that originate or spread fake and injurious news liable to prosecution.

“The Nigeria Communications Commission, NCC must also compel GSM service providers to bar all numbers on their networks that are not registered as provided by the law”.

He urged the news consuming Nigeria public to be more discerning and insist on sources of information before sharing such on their mobile tools.

The Next level ministerial nominee at glance.