Popular Posts
BREAST SUCKING; IS BENEFICIAL FOR ADULTS.
The History of Ede town,the home of Timi...
LIST OF THE NEWLY ELECTED HONOURABLE MEMBERS OF...
BANIK greets Muslims at Ramadan.
Gists

Kazeem Aro Balogun, Everyday for The Thief, One Day for the Owner” – Yoruba Proverb

“Everyday for The Thief, One Day for the Owner” – Yoruba Proverb. 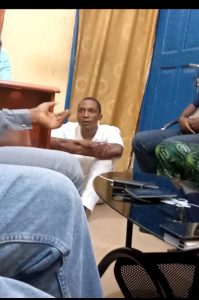 To set the records straight, One Mr. Kazeem Aro Balogun was this afternoon arrested for questioning by the SIB of Nigeria Police upon receipt of a petition, to prove his allegations of financial impropriety, mismanagement of public funds and corrupt tendencies as contained in his Facebook post against Engr. Remi Omowaiye.

As we write now, Kazeem Aro Balogun is still in police detention and will be charged to court on Monday. The Police also used the medium to extend invitation to Mr. Adeolu Alao (Jake Luis) for the same offence who has refused to honour previous invitations since July 2019

Akinfenwa’s death: Another loss to the progressives’ family –Oyetola.