JUST BEFORE DARKNESS FALL ON YORUBA HISTORY … when we were in elementary and secondary schools, we were taught history for the purpose of preserving our past, in order to guide our future. Then, several decades back, we were taught the history of old Yoruba Empires of which Oyo Empire was an integral parts. There was series of internal war in then old Yoruba Empires, like the Kiriji War, the Ijaiye War, Oluyole War, Ekiti Parapo War, Awoyaya War and the rest of them. During this period, we were taught that war generalissimos like Are Ona Kakanfo from Oyo, Kurunmi of Ijaiye, Sodeke of Egba, Ogedengbe Agbogungboro of Ijesha, Oluyole and Bashorun Ga from Ibadan and Fabunmi Okemesi of the Ekiti Parapo fame, held sway and reigned supreme in their various Empires.

The aforementioned Warlords were Independent of old Oyo Empire, excepts the Are Ona Kakanfo that took instruction directly from the reigning Alafin. In order words, the influence of Are Ona Kakanfo and power to declare war was restricted to the old Oyo Empire and not Yoruba in entirety. Having outlined these points, then the recent coronation of Gani Adams as Are Ona Kakanfo of Yoruba land should be seen as exigency of time and not backed by historical antecedents. 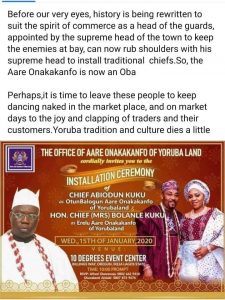 For same Gani Adams to wake up one morning and decides to confer Chieftaincy titles of Otun Balogun Are Ona Kakanfo of Yoruba land and Yeye Are Ona Kakanfo of Yoruba land on one Biodun Kuku and his wife amounts to bastardization of Yoruba Chieftaincy titles and clearly overstepping of bounds. Gani Adams should have limited such activities to his Arigidi Akoko native town and stop insulting the sensibilities of Yoruba Sons and Daughters majority of who are more well to do than him. It is not too late, Alafin should call this power monger to order and pull him by the ears to stop insulting our sensibilities.

The comprehensive history of Ara town in Egbedore...

Osun Is Following Due Process In Selection of...

Comparison between Hisbah and Amotekun

Mayegun Installation: your power does not extend beyond...

Ótún,Basorun,Gbonka,Akinrogun,Erelu and other nonsense to be installed by...

Oluwo of Iwo speaks about his broken marriage.