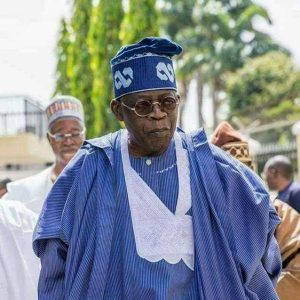 All his classmates (Governors of 1999 to 2007 class) now “bow”, kneel and squat before him seeking one assistance or another. Former No. 1 men (leaders) of the country respect him so much so that he is now seen as one of them….a member of the revered and exclusive class.

I was just thinking aloud and wondering how the man Bola Ahmed Tinubu got to this political height. He is working and walking his talk. He doesn’t seem to be boasting. Every step he takes is an assuring and convincing one….so clear as if he sees tomorrow.

How else can you describe this man? A political colossus? A political trojan? A political mountain? A political giant? A political warrior? Or a lucky politician? But if he was lucky perhaps it was because he was working while his mates especially the governors between 1999 and 2007 were all sleeping. Give it to Tinubu, it doesn’t matter if you hate or love him.

He knows the political terrain and like an expert, a thorough geographer he knows his ways to the top irrespective of the topography of the Nigerian political landscape.

If he was lucky to have risen to the top when his mates were sleeping, how come he is standing shoulder to shoulder, face to face and eyeball to eyeball with a former Head of State and former President of the Federal Republic of Nigeria looking straight into his eyes to say WE ARE EQUALS.

Indeed the next four years will determine a lot in the political career and story of this man whose only spot left to reach is the topmost top having installed a sitting President and picked virtually all the principal officers of the 9th National Assembly plus new cabinet members of Mr. President.

I Won’t Renege On My Promises, Governor Gboyega Oyetola