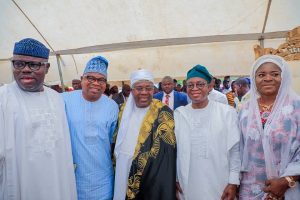 Indigenes of Iwo Land, at the weekend, lauded Osun State Governor, Adegboyega Oyetola for the administration’s decision to fix the Osogbo-Iwo road.

The Oluwo of Iwo Land, Oba Abdul-Rasheed Adewale Akanbi Telu I, conveyed the commendation by his people to the governor, during a turbaning ceremony, held at the Oluwo Palace Square.

Traditional title holders, including Muslim clerics from the area all joined the monarch to specially appreciate the governor for the road project. 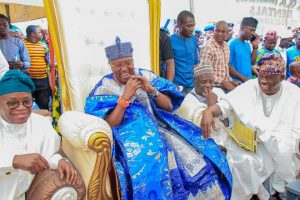 In the build-up to the last governorship election in the state, the governor had promised to fix the road if elected. After the election, the governor again reiterated the promise during his ‘Thank You Visit’ across the state.

In fulfilment of the promise, work commenced on the project last month, an action that has further endeared the governor to the people of the area.

The commendation came even as the governor paid a surprise visit to a prominent Iwo son and immediate past Secretary to the Government of the State of Osun, Alhaji Moshood Adeoti. 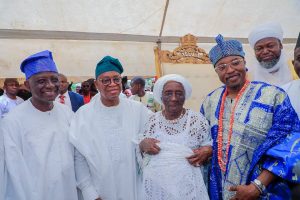 Adeoti was the governorship candidate of the Action Democratic Party (ADP) in the September 2018 governorship election won by Oyetola. He had left his former party, All Progressives Congress (APC) to ADP in the build- up to the contest. 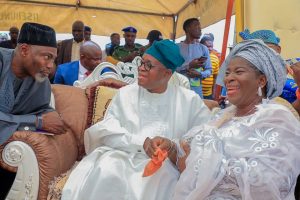 At the turbaning ceremony, the monarch said the people of Iwo were appreciative of the governor over his timely response to their most pressing demand for reconstruction and rehabilitation of Osogbo-Iwo road, adding that his people had asked him to commend Mr. Governor for doing a good job.

Oba Abdul-Rasheed, who described the road project as a kind gesture to Iwo Land, said the governor had no doubt given his people another reason to continue to repose confidence in his ability to transform the state and take it to greater heights.

He prayed God should continue to support Oyetola and grant him the ability to complete the good work he has embarked upon since the beginning of his administration as the governor of the State.

He said, “My people are very happy about the work that Your Excellency has commenced on reconstruction and rehabilitation of Osogbo-Iwo road. That road was almost becoming an intractable problem for the government but you have come to further convince us that with God nothing is impossible.

“I am happy with the good work you are doing; my people are happy and they have asked me to commend and appreciate you for this.

“No doubt, you have given me and my people another reason to continue believing in you and your capabilities to transform the economy of this state and take it to greater heights.

“We pray that Almighty Allah will continue to support you and grant you the wisdom and ability to complete the good works you have started since the beginning of your administration in the state.

“My people, look at this man (pointing at the governor), we will return him for a second term. Anyone who is interested in becoming governor should wait for Mr. Governor to complete his two terms, ” the Oluwo said.

The monarch also thanked the governor for gracing the turbaning ceremony of four eminent citizens of Iwo Land, saying the people will reciprocate the gesture at the appropriate time.