Popular Posts
North-West, South-West lead as INEC registers 96.2 million
BREAST SUCKING; IS BENEFICIAL FOR ADULTS.
The Biography of the Alaafin Oyo his imperial...
The biography of Dr Richard Adekola Idowu and...
June 12: A milestone for Democracy By Asiwaju...
Gists 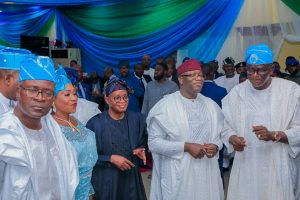 Lasting solution to the economic challenges confronting Nigeria, was on Friday night X-rayed by Governor Gboyega Oyetola of The State of Osun at the 2019 Independence Dance of the Island Club, where he was honoured and inducted as member of the club.

The governor, who doubled as a Special Guest of Honour at the grand event, said collaborative effort among the states, individuals, corporate bodies and federal government would be required to tackle the economic challenges in Nigeria. 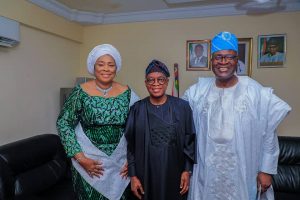 Oyetola, who thanked the Club for honouring him, expressed dissatisfaction that after 59 years of existence, Nigeria is still struggling to get its economy right.

He identified five major issues as defining factors for Nigeria’s economic woes, including youth unemployment, poverty, corruption, weak institutions and insecurity, adding that the identified challenges must be tackled for the country’s economy to be on good standing. 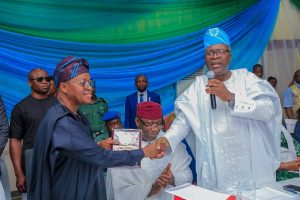 He however lauded President Muhammadu Buhari whom he described as the face of integrity and good governance for his efforts at resolving some of the identified challenges, and particularly the fight against corruption, calling on eminent Nigerians, including members of the Island Club and other philanthropic Nigerians to join the government in the struggle to move Nigeria forward. 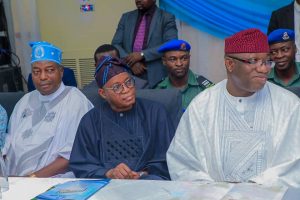 He said government at all levels must work out a synergy with the private sector to solve these key problems with a view to revamping the country’s economy.

He said, “In line with your expectations that I ‘make pronouncements on our national state of affairs’, I carry with me six kits: youth unemployment, poverty, corruption, weak institutions and insecurity.

“Nigeria, like most countries, is still struggling to get its economy right after years in the global economic trenches. With this struggle come the nagging and persistent issues of youth unemployment, poverty, corruption, weak institutions, and insecurity. We will all agree that solving most of these problems revolves substantially around fixing the economy.

“As front liners and opinion holders, political and industry elites have a duty to lead our citizens on the path of unity in diversity. Our ethnic, religious and linguistic diversity should be the sources of our strength.

“The elite in industry and organised groups such as the Island Club must get involved. Politics is too sensitive, too involving, too crucial, to be left to the politicians alone. With the President Muhammadu Buhari-led Diversification of the Economy Policy, the Federal Government has liberalised agriculture, mining, with credits and loans to make them viable.

“Agriculture alone has proved that it is able to banish hunger and provide jobs for a substantial number of our teeming youths.

“Efforts are also on top gear to create an enabling environment to bring back our manufacturing sectors to mop up youth unemployment.

“All the 36 states of the Federation, corporate organisations, groups and well-meaning Nigerians need to collaborate with the Federal Government to massively tackle unemployment and hunger. There is also no doubt that if well handled, agriculture alone can mop up close to half of the unemployed youths.”

While lauding the Buhari-led administration for pursuing vigorously the diversification policy, Oyetola said “as at 2015 when President Muhammadu Buhari assumed office, corruption had become a second name of the nation. Corruption is a cancer to the economy, health, infrastructure and other sectors of the nation.

“Beyond financial manifestation, corruption is at the root of pervasive collapsed buildings, failed roads, compromised drugs and foods and other digestible that are dangerous to life and health.

“President Buhari assumed office as the symbol and face of integrity and good governance. He has dealt a huge blow on corruption in his four and half years as President through the introduction of Treasury Single Account, arrest and prosecution of corrupt officials, fortifying anti-corruption organisations and institutions of anti-corruption policies.

“Barely two years in the saddle, the president began walking tall among his colleagues around the world for his stance on corruption.

“This worthwhile initiative must be embraced by the other two tiers of government; all the states, their Ministries, Departments and Agencies as well as the local government areas and corporate organisations.

“There is also a need to introduce anti-corruption crusade in the curricular of tertiary institutions to prepare the leaders of tomorrow for the onerous task of leadership.

“Our people require education and sensitisation to buy into a new improved Nigeria. The civil society and the media should be at the forefront of this vanguard. Government at all levels must show guidance and leadership by mustering the political will to drive a new Nigeria.

“There has to be synergy between the governments at all levels and the private sector. Government must continue to create an enabling environment for the public sector to grow the economy and provide employment.

“When public and corporate activities are powered by strategic thinking, planning, continuity and sustainable development will be on auto pilot and our nation will be on the path of prosperity and progress,” he added.