Ishola Olateju: Extolling the Virtues of an Exemplary Leader.
By Adelowo Abeegunde. 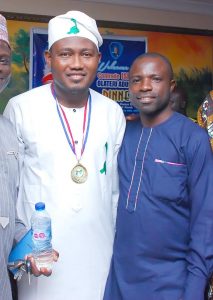 Nigeria despite its almost 200 million population is bedeviled with leadership challenges. The political landscape is full of different leaders, most lacking essential leadership qualities. Many claimed to be leaders but can not raise a finger for their followers.

Different authors have defined leadership in different ways. According to Keith Davis, “Leadership is the ability to persuade others to seek defined objectives enthusiastically. It is the human factor that binds a group together and motivates it towards goals.”

Leadership has also been described as the art of motivating a group of people to act towards achieving a common goal.

Leadership was simplified by that popular and great author, John C Maxwell, who says that, “A leader is one who knows the way, goes the way and shows the way”.

In my own understanding of what leadership entails, I have come to the conclusion that having more of Teju among our young politicians of today, is all that we need for a productive leadership in no distant time in Nigeria.

Olateju, the Personal Assistant to Aregbesola has been a source of joy to everyone that has crossed his path. He is a cheer giver and philanthropist extraordinaire.

Within a short space of time that I came in contact with this enigma, I have seen him building people. Instead of just giving you fish, he provides the fish and still teaches you how to catch fish. He provides answers to naughty situations which makes one wonder where he got the inspiration from.

Although, one may not be surprised as he is a close staff of Rauf Aregbesola, a man ahead of his time. I guess, he has learned a lot from his boss.

Ishola Olateju took over the leadership of the foremost group, Asiwaju Grassroots Foundation, a political group, promoting and propagating the ideology of the ruling All Progressives Congress, APC, national leader, Asiwaju Bola Ahmed Tinubu, after the demise of the former coordinator.

Ishola after stepping into the big shoes has been able to lift the banner of the Foundation to a greater and enviable heights. Undoubtedly, the founding fathers will surely be proud of his leadership.

The Foundation has become a voice in the political space since his assumption of office. The biometric registration of members is currently ongoing which will digitalize the operations of the group.

Also, the group can now proud of having its members in the position of authority across the country due to the purposeful leadership of Olateju.

He has the vision to give back to society and this prompted him to establish the Ishola Foundation, a foundation that is taking care of all Igbomina people.

Today, Ishola Olateju Foundation has trained more than 200 igbomina’s in different handwork and provides working tools for them.

Recently, while he was been hosted by friends to a dinner in Ilorin, Olateju promised to expand the work of the Foundation to include taking care of the elders and aged in Igbomina land.

Olateju, a graduate of Kwara State Polytechnic and currently, an undergraduate at the prestigious University of Ibadan, is a leader to behold. His leadership virtues worth extolling.

The popular ‘Not too Young to Rule’ is just icing on the cake of this man of the people and I am convinced beyond a reasonable doubt that he will make Nigeria proud in a not too distant time.

Olateju is a leader we are all proud of. Nigerians should watch out for this young leader.

Abeegunde is the Deputy Coordinator of Progressives e- Group. He writes from Abuja.