Popular Posts
The Story Of Attah Ameh Oboni – the...
The state of Osun Anthem,Yoruba and English.
Opon Imon (Tablet of Knowledge)Read this carefully from...
The Biography of the Alaafin Oyo his imperial...
Breaking News: Again, Ladi Adebutu Loses To Jimi...
Politics 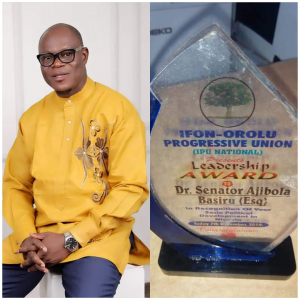 This was made in a speech delivered by the Union’s Chairman while presenting a Leadership Award to Sen. Ajibola Basiru who was represented by Hon Olaide Ajibola today at the palace of his Royal Majesty Oba Maruf Magbagbeola, the Olufon of Ifon-Osun who was also present at the occasion.

The people of Orolu kingdom commended Senator Basiru on the roles he played while serving as Attorney General and Commissioner of Justice under Ogbeni Rauf Aregbesola in helping them to actualize the Orolu State Constituency of the State of Osun.

In his response, Hon Olaide Ajibola who received the award on behalf of Senator Basiru thanked the Royal Father and the good people of Ifon-Orolu kingdom for their sincere and continuous support for Dr Ajibola Basiru.

He said such an acknowledgement would steer Senator Basiru to work harder and render more valuable services to the people of Osun Central senatorial district.

Oluwo of Iwo speaks about his broken marriage.