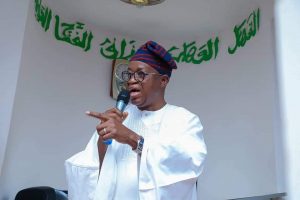 Governor Adegboyega Oyetola of Osun State has called on Muslim faithful to strive to emulate the virtuous life of total obedience, love, justice, and self-sacrifice of Prophet Ibrahim, which he described as the whole essence of Eid-el Kabir celebration.

Similarly, he urged Muslims to ensure that they make only those promises they know they can keep.

In a statement by the Chief Press Secretary to the governor, Ismail Omipidan, the governor made the call to the people of the state on the occasion of Eid-el- Kabir. He stated that the observance of such virtues will take the state to the Promised Land.

The governor said: “The Eid-el Kabir has no doubt presented another opportunity for us as Muslims and indeed all Nigerians to reflect on the state of affairs in the country and walk in the right direction to turn the fortunes of the state and the country around.

“I congratulate the Muslim Ummah and I urge them to emulate the great virtues of Prophet Ibrahim of total obedience, love, justice, and self-sacrifice, which is the whole essence of this celebration. As Muslims, we must ensure that we make only promises that we know we can keep.

“I have no doubt that with prayers and the right attitude and policies that our administration has so far brought to bear, our state will emerge stronger, going forward.”

The governor wishes the Muslim faithful and the country a happy Eid-el-Kabir.