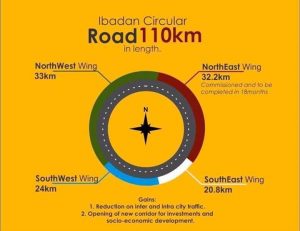 The attention of ENL Consortium Ltd has been drawn to various reports in the news media suggesting that ENL Consortium Limited was paid N67 billion by the Oyo State Government to construct the Circular Road, in Ibadan Oyo State, and has failed to perform. This followed the site inspection led by the Oyo State Government, Engr. Seyi Makinde yesterday during which he expressed disappointment over the pace of work.

-For the avoidance of further misunderstanding, here is setting the records straight on the Ibadan Circular Road project: OYO STATE GOVERNMENT NEVER PAID ENL Consortium Ltd any kobo to execute this contract.

-The 32km East wing circular road project is therefore at no monetory cost to Oyo state government as ENL Consortium, the concessionaire company is expected to raise the required funds for the project and build to the specification of the state government

-After some initial challenges, ENL Consortium has been able to attract the financing required and we are meeting with Oyo State to map a way forward.

-ENL would like to state without reservation that we are committed to completing the project. In demonstration of this, we have cleared 26kms out of the 32 kms, built 4 culverts, and done earthworks. We are currently working on cutting and filling. We have established in Ibadan for this project, 2 quarries and we have installed 3 crushers. We have also installed an asphalt plant, and we are currently in the process of installing a second asphalt plant which is expected to be one of the largest capacity asphalt plants in Nigeria.

-ENL prides itself on the reputation it has built over the years.

-While efforts are ongoing to agree the way forward between our company and the Oyo State Government, may plead with the media to kindly report the facts of this matter as truthfully as they can without political colourations. Thank you.

Oyetola Government is your government, you must support it ~ Hon. Adeleke Yekini Adedayo (Baniks) charges the Progressives e-Group.