I Won’t Renege On My Promises, Governor Gboyega Oyetola

I Won’t Renege On My Promises, Oyetola 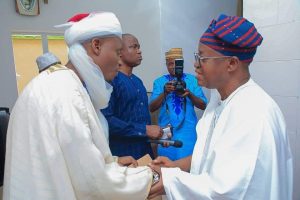 The Chief Imaam of Oladejo Memorial Mosque, Gbongan Road,Osogbo,Alhaji AbdulGaniy Shittu has stressed the need for parents to prioritize the education of their children.

Alhaji Shittu who gave the charge in his sermon during the Jumaat Service said parents would account for how they raised their children before Allaah on the day of judgment.

Congratulating the Governor on his victory at the Supreme Court,Imaam Abdul Ganiy Shittu commended the Governor for his achievements within just eight months particularly in the revitalisation of the health as well as rehabilitation of roads and resuscitation of streetlights in the State.

Imaam Shitu charged Mr Oyetola to govern the State with the fear of Allaah just as he called on the people of the State to pay their taxes and other dues for Government to achieve the more.

In his remarks after the two rakaat prayer, Governor Gboyega Oyetola thanked the congregation for their support and for believing in the ideals of The All Progressives Congress in the State.

He assured the people that he would not renege on the promises he made while seeking their votes while regular and full payment of salaries will continue.