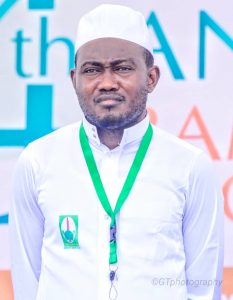 It was a glorious homecoming for the National Coordinator of Asiwaju Grassroots Foundation (AGF), Comrade Olateju Adunni who visited members of the Foundation in Osun since he assumed office.

In his address to the gathering drawn from the 31 Local Governments and 37 LCDAs in the state, Olateju assured that their efforts will not be in vain.

The AGF National Coordinator who could not hide his joy was full of praises for their consistency and loyalty to their party at all times.

Ishola assured them that the leadership of the foundation will do everything within its powers to protect the interest of members just as he maintained that they will benefit enormously from the APC in not distant time.

Comrade Ishola used the opportunity to roll out programmes of his leadership which was greeted with applause from members.

Earlier, the state of Osun Coordinator of the Foundation, Tijani Sikiru asked members not to relent in their support for the Foundation, the APC and the Government of Governor Gboyega Oyetola.

While welcoming the National Coordinator, Comrade Tijani described him as GAME CHANGER saying his few months in office has rekindled the hope of members in Asiwaju Grassroots Foundation.