How woman and her three children miraculously escapes accident in Osogbo this mornig.

There was pandemonium this morning at Osogbo the state of Osun capital when a water tanker coming from Tinumola area lost control and headed straight to the main road during the time school children were moving to their respective schools.

There was a woman name withheld who escaped the accident miraculously during the incident, the woman in question was taking her three children to the nearby private school and rushed to escaped being hit with the moving lorry which already lost control and running toward the woman and her children.

The place was full of praises by the onlookers who witnessed the accident, the lorry eventually ran to the culverts and stopped immediately. 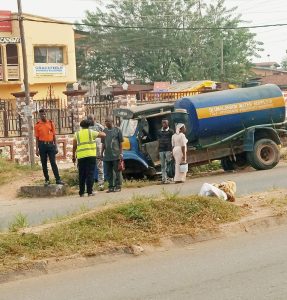 How best to respond to our critics By vice president Yemi Osinbajo.

Check the pictures of how Ogbeni Rauf Aregbesola was given heroic welcome back to Ilesha by his kinsmen.