Ilesha, Nigeria – In his early twenties, Simeon Abolarinwa did the grown-up thing of making a curriculum vitae for the first time. At the bottom of the document, he listed his hobbies: hunting, hiking and fishing. Unlike many of his peers doing the same to fill space or boost their profiles, these were actually his hobbies.

Growing up in his native Osun state in southwest Nigeria, he regularly snuck out of the family house to make hooks out of binding wire and go fishing with friends in nearby streams.

These days, the 41 year old lives in Osogbo, the state capital, working as a network administrator with a university. His favourite place to fish is a spot on the Osun river, less than a kilometre (half a mile) from his apartment and a few kilometres from the Osun-Osogbo Sacred Grove, a UNESCO World Heritage site.

“I have this personal connection to Osun river,” Abolarinwa told Al Jazeera. “Where will I practise my hobby if not at the Osun river?”

He also goes to the grove – where fishing is not allowed – to play with monkeys and watch wildlife. During the lockdown, he took to going to his fishing spot to climb rocks or just sit and admire nature. “I have a lecturer friend at the university, an ornithologist who I’d go with to watch birds,” he said.

Sometimes he goes fishing alone and at other times, with a group of fishing enthusiasts. At times, they just admire their catch before releasing it back into the river but, mostly, they catch to eat.

On his Twitter profile, the pinned tweet is a photo of him excitedly grilling fish on an open fire, a new pastime for a man who disliked eating fresh fish as a child. 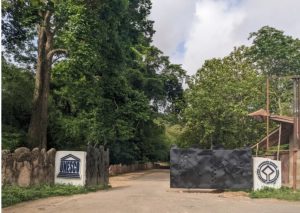 All this made Abolarinwa somewhat of a fishing nerd; he knows that elephant fish is too soft to be boiled but is best smoked, and that it is dangerous to fish during the rainy season because the water level rises.

He learned that October/November, the onset of the dry season, is fishing season because fish breed when the water level rises and “depending on the fish, within three months, they are sizeable to be caught”.

On a fishing trip just as the rainy season was ending in 2019, he found the water cloudy. He blamed it on flooding because the rain clouds things – unlike during the dry season when you can see the bottom of the river in the shallows.

“In the rainy season, that colour would be normal, as all the runoff comes into the water,” Abolarinwa told Al Jazeera. Dry season came, but the water stayed the same. Eventually, they began seeing dead fish floating on the water.

“We thought it was a temporary thing, that maybe someone threw chemicals into the tributary along the way, and the fish became dead and floated down,” he said. “[But] it became worse in 2020. The water was like tea, in the middle of the dry season.”

The fishermen and farmers Abolarinwa met who were using the water for irrigation wondered: Did someone poison the water? Why do we see so many dead fish?

My purported expulsion from PDP is a ruse – Prince Dotun Babayemi.

Re; Misinformed WAEC Ratings Of Osun Pupils’ Performance In 2022 WASSCE.