Hope for Egbedore local govt and others as Oyetola reassures that No LG will be marginalised in cabinet formation. 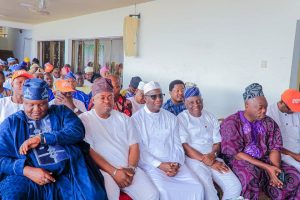 The Osun State Governor, Adegboyega Oyetola, has reassured the citizens of the state of adequate representation in the administration, especially with regard to political appointments.

He said the administration was committed to ensuring that every local government of the state was fully represented in the management of the affairs of the state, saying apart from the list that had just been released, there are many more appointments to be made and that those councils that may not have benefitted from the list of commissioners and advisers would certainly benefit from subsequent appointments that would be made. 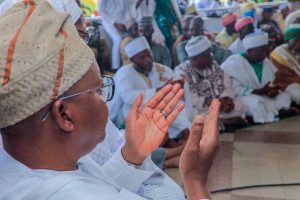 Oyetola further said that the administration was committed to the welfare and general well-being of the people of the state as manifested in the myriads of social intervention programmes that the state has been embarking on in the last 10 months.

Fielding questions from journalists on Sunday at the Government House, Osogbo, shortly after the prayer session organised in his honour by the committee of friends to mark his 65th birthday anniversary, the governor appealed to the protesting citizens to remain calm as the government is committed to ensuring equal representation. 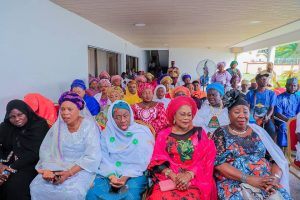 “It is expected that in a process like this we will have few complaints here and there, but we have followed due process in the choice of the people that made the list and everybody that we have picked was picked based on merit.

“We play politics when seeking the office. But now that we have been elected, we are facing governance. I urge all those that will be working with me in the cabinet to imbibe the same spirit. They must put politics aside and face governance so that we can deliver on our mandate.

“Again, there are quite a number of other positions that we can fix our people in. As a matter of fact, everybody cannot make the cabinet; all we are doing is to ensure that people that will work with us are those that can help to drive our policies in our quest to deliver good governance.

“We are committed to ensuring fairness in all we do, particularly in the distribution of appointments and infrastructure, among others. I can assure that those that we picked are people of substance who were chosen by their people and the party. We followed our party’s directive before the appointment and I can assure our people of excellent performance.

“As for those who believe that unless they have their representative in the cabinet, they cannot get infrastructure development, I want to assure them of equitable distribution of resources and that there won’t be any infrastructure gap.

“We are going to resolve where we have issues. In any case, if you look at our lawmakers in the state House of Assembly, we have 26 of them against 31 Local Government Areas in the state. It is not every local government that has representative in the House.

“I charge those that have been appointed to see their appointments as service to the people and the state. They must all see the need to serve and not to abuse the office”, Oyetola said.

On his birthday, the governor expressed gratitude to God for sparing his life to witness another year, just as he appealed to the people of the state to continue to support the administration, assuring them of “better days ahead.”

In his lecture, the Mufasir-li-Imam of Osogbo, Sheihk Maroof Ishola, urged the celebrant to dedicate much of his time to prayers and thanksgiving to God for the mercies shown on him and his family.

He commended the governor for fulfilling the promises made while seeking office as being manifested in the pace of developmental strides achieved in the last 10 months.

Sheikh Ishola, who expressed confidence in the administration, said the state is on the verge of unprecedented development.

The cleric also seized the occasion to admonish the nominees on the need for them to prioritise the development of the state in all they do.

Also, the State Chairman of the All Progressives Congress (APC), Prince Gboyega Famodun, corroborated the governor when he said the appointment of the Commissioner and Special Adviser designates was purely the party’s affair, saying the governor consulted widely before making the list public.