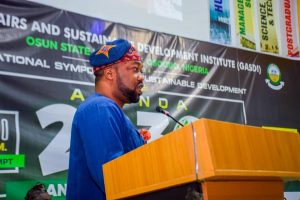 The security challenge in connection with cattle rearing, herdsmen-farmers relationship in Nigeria must be handled with open mindedness with a view to preserving the country’s unity, peaceful coexistence and the historical economic association among the various ethnic nationalities in the nation.

“The challenge is not merely an ethnic, religious or political onslaught. Scientifically, It is also the struggle for survival as occasioned by Climate Change and Environmental hazards like desert encroachment, drying up of lake chad etc.”

This is the submission of the Chief Whip of the Osun State House of Assembly, Mr Tunde Olatunji when he shared his perspectives on the controversial issue at a security summit in Iragbiji, Ifelodun local Government of Osun State.

Mr Olatunji noted that the incessant herders-farmers clashes over grazing land, the nomadic nature of herdsmen and migration from neighbouring West African countries had culminated in the criminalisation of the Fulani ethnic group as being largely responsible for the spate of kidnappings and killings in the country.

He submitted that it was a parochial construct to blame a particular tribe for the growing spate of criminal activities, a development which he said would continue to impede the possibility of taming kidnapping and banditry in the Country.

In his words, “We can only solve it when we realise that we need ourselves and our peaceful coexistence is not negotiable”.

The Legislator explained that findings had shown that no less than 60% of Cows in Nigeria are consumed in the southern part of the country, adding that why the Fulani cattle rearers need market for their cows, people down the south of the Sahara also require the cows as largely accessible source of animal protein.

The Chief Whip who said the size of grazing zone in the USA was bigger than the entire Nigeria arable land mass, maintained that such challenge was a global phenomenon but scientifically managed in the advanced climes.

Mr Olatunji who called for honest and pragmatic measure to resolve in the incessant crisis, canvassed for a second look into the existing grazing law which stipulated that land should be earmarked for grazing nationwide.

He submitted that so long there was no solution to restoring the lake chad dryness, the seven million people displaced in the region due to extinction of natural resources and who are majorly nomads, would continue to encroach violently into southward of the sahara region for survival.