Governor of The State of Osun, Mr. Adegboyega Oyetola has restructured the ministries in the state. 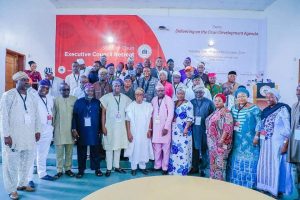 He said the idea was to make the government more effective and efficient in the pursuit of the administration’s development agenda for the state.

This was contained in a communique issued at the end of a 4-day Executive Council Retreat for Commissioner and Special Adviser designates, which held at MicCom Golf Resort, Ada, State of Osun.

Similarly, the governor has also charged the appointees to ensure full implementation of all ideas generated at the retreat for the benefit of the state.

Oyetola, who spoke after the communique for the retreat was read out and adopted on Friday, to signal the end of the retreat maintained that the four-day programme had generated what he decsribed as “various ideas of immense value”.

He assured the nominees that he would give necessary support within the limits of the available resources to enable them perform, as the administration was determined to deliver “an Osun that would become a benchmark for many generations to come.” 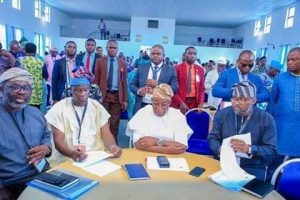 He added that a performance charter would be handed to each of the nominees as a way of measuring their individual relevance in the cabinet.

“The only way to reciprocate the trust reposed in us is to go ahead and implement the Development Agenda conscientiously. As you know, great ideas are only relevant to the extent to which they are translated to concrete and measurable impact on the people.

“It would have been sheer waste of valuable time if all that have been produced here are not painstakingly applied in enhancing the quality of life of our beloved citizens.

“Your tasks have been carefully defined to enable you give full expression to your competence and contribution within the larger context of the Development Agenda. I count on you to write your name in gold through excellent service delivery.

“As I mentioned in my address to you on Wednesday, we are a team on the threshold of history and what we do with the privileged opportunity would determine what posterity would record about us. We have an opportunity to make indelible footprints in the sands of time and we must not fall short.

“Our people are waiting. I am ready. I know it is possible. Together, let’s labour to deliver an Osun that would become a benchmark for many generations to come.

“That is the pathway to living forever in the minds of the people. Let’s tread it. A greater Osun that works for all classes of our people, with adequate physical and social infrastructure to support industry, and where there is abundant economic prosperity for all is our vision. And we shall attain it,” the governor added. 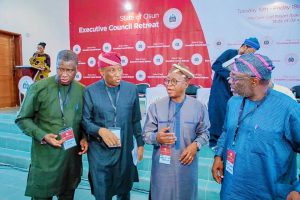 The governor noted that there would be no ranking in the cabinet and that the idea of Commissioner and Special Adviser was merely for administrative convenience.

Earlier, Chief of Staff to the Governor, Dr. Charles Akinola, said the essence of the retreat was to prepare the appointees for the task ahead in order to understand the nitty gritty of the government’s development agenda.