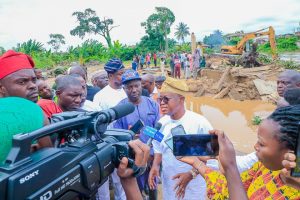 Osun State Government yesterday commenced massive dredging of its rivers and waterways as part of measures to forestall flooding.

Similarly, Governor Adegboyega Oyetola has reiterated his warning to residents against the bad habit of disposing wastes in rivers and drainages, saying the government will soon set up a Task Force to ensure citizens of the state dispose their wastes in accordance with the state’s environmental regulations.

Oyetola spoke on Friday shortly after he observed Juma’at prayer at the Osun State Government Secretariat Central Mosque, Osogbo and when he visited some flooded areas where the dredging exercise has begun. 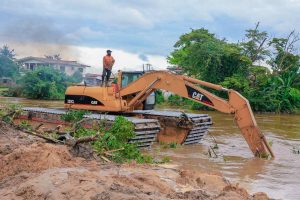 It will be recalled that the governor and his entourage had last Sunday visited some flooded areas in Osogbo, the state capital to assess the extent of damage. He had on the occasion promised that the government would commence the dredging of the rivers by this week.

Speaking during the inspection of the ongoing dredging, Oyetola who stopped over on his way from the Mosque to do the inspection identified the topographical location of the state as the major reason for the incidence of the overflow of the rivers. He called on the people of the state to cultivate the habit of proper waste disposal and management.

He said the decision to dredge all the rivers and waterways across the state were in fulfilment of the administration’s commitment to ensuring the security of lives and property of the citizens.

“This exercise is a confirmation of the fact that our administration is concerned about the security of lives and property of our people.

“We were here last Sunday to assure our people that the dredging exercise would commence, and as you can see, we have fulfilled the promise that we made. The dredging and channelisation exercise which they have commenced would help to widen the canals for the free flow of water.

“My appeal to our people is to do away with indiscriminate dumping of refuse. We must all adhere strictly to proper disposal and management of refuse. This is the only way to keep our rivers and waterways safe from this occurrence. What had happened here clearly shows that a lot of refuse were dumped here, causing blockages, affecting the free flow of water which eventually resulted to flooding.

“As a government, we are committed to clean environment and hygienic living and we will stop at nothing to achieving these.

“With what we have seen, we have discovered that some buildings also encroached on the waterways and what this means is that, it will be difficult for water to flow freely and when this happens, flood will occur just like what we experienced last week. But we thank God no life was lost.

“In our efforts to ensure that this occurrence didn’t happen again, we will not hesitate to take away some buildings to avert flooding in the future, as well as further guarantee safety of our people.

“So my appeal once again to the people around here is to exercise patience as we are working hard to ensure that they get some relief. We are fully prepared for the welfare and well being of our people and as a government we shall do our best to achieve these.

“I must commend the Federal Government through the office of the Secretary to the Government of the Federation (SGF) for the show of concern. They have visited the state before now, they have seen some of these areas and it is our hope that they will do something soon to assist the state”, Oyetola stressed.

The contractor handling the project, Engineer Benjamin Olamiju, assured the state of quality service, saying the dredging exercise would be completed in the next few weeks.

He commended the state government for its swift response to the incidence.

Three of the residents of the flooded areas, Mr. Kamoru Omolade; Mr. Olayiwola Gbadewo and Mrs. Abulo Omolara applauded the government for its timely response to their plights.

You are a distinguished cerebral,humble and purposeful young professional in politics – Ooni of Ife eulogizes Hon Tunde Lekan Olatunji.