Ede with a rich history “Timi Lagunju” internecine Yoruba wars and his wars against Fulanis.

EDE WITH A RICH HISTORY *TIMI LAGUNJU, INTERNECINE YORUBA WARS AND HIS WARS AGAINST FULANIS.* 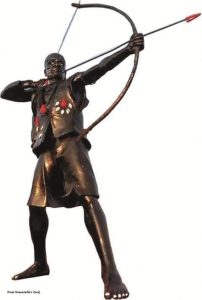 Timi Abibu Lagunju was one of the outstanding warrior-rulers of the 19th century who made vital contributions to the questions of war and peace. While some monarchs, particularly the Alaafin of Oyo, no longer went to battle fronts from the 1840s, Timi Lagunju still personally led Ede forces on military expeditions particularly on the side of Ibadan. In fact, it is to Lagunju’s credit that right from mid-1850, there was a sort of Ede-Ibadan military confederacy with Ibadan as the stronger partner. A shrewd political and military strategist, Lagunju allied Ede, at the most appropriate time, with Ibadan, the most militarily strong power in 19th century Yorubaland. It is on record that Ede under Lagunju fought on the side of Ibadan during the Ijaye War (1860¬-1865).[7]

Again, Lagunju took side with Ibadan during the Jalumi war of 1878 and fought to expel the Fulani from northern Yorubaland. During this war, Ede forces under Lagunju camped at Ikirun and the site, to this day, has been referred to as Oke-Timi. Ede’s participation in the Jalumi war was, in fact, a war of self-defense apart from being a leading member of Ibadan alliance. For the Emir of Ilorin, specifically directed Balogun Ajia, the commander of the Ilorin forces, to conquer Ikirun, Osogbo, Ede and Iwo with their villages. Traditions preserved by Olunlade record that both Timi Lagunju and Balogun Ajayi Ogboriefon distinguished themselves in this war which ended in favour of Ibadan allied army. Moreover, Ede under Timi Lagunju also allied with Ibadan in the Ekitiparapo War (1879-1886) and, in fact, he gave Ibadan total and unwavering support. At the initial stage of the war Lagunju dispatched the deposed Timi Olunloye to the war-front as the captain of Ede forces. The latter lost his life in the war.”[7]

Arising out of Ede’s material and human support for the Ibadan alliance, Derin Ologbenla, the Ooni-elect of Ife even contemplated a military assault on the town in April 1882. For instance, evidence abounds that he distributed arms and ammunitions to Ikire, Gbongan and Edunabon with a view to subjugating Modakeke first “which being removed out of the way Ede would be besieged and thus the Ibadans’ in the camp would be taken in front and in the rear.” However, the towns in question refused to carry out Derin’s bidding and, contrarily, forwarded all the arms to Aare Latoosa.[8]

Like Ife, the Ilorin forces also contemplated attacking Ede after the sack of Offa in 1887 because of its total and unalloyed support for the Ibadan Alliance. Johnson’s testimony is relevant here: The llorin plan, if successful at Ile-Aro was to attack Ofa, and Ede next and thereby dislodge the Ibadans’ from Ikirun.” Just as Ede participated actively in the Ekitiparapo War, it was also seriously involved in peace-making processes, particularly the 1886 Peace Treaty and the efforts of 1890. Ede, in fact, was one of the venues for the shuttle diplomacy. However, if the September 1886 Peace Treaty heralded the end of the Ekitiparapo war, the immediate aftermath of the peace wrought great material havoc on Timi Lagunju as his house in Ikirun was burnt down by some fleeing Ibadan slaves, those who seized the opportunity to assert their independence.[1]

Indeed, Timi Abibu Lagunju was committed to restoration of peace in Yorubaland after a century of internecine warfare. He was concerned about the sorry state of Ile-Ife, the reverred cradle of the Yoruba race. In this regard Lagunju, Lamuye of Iwo and Balogun Osungbekun of Ibadan aligned themselves with Ife conditions for peace, i.e., that Modakeke should evacuate Ife. It is important to stress that the ‘Modakeke Question’ threatened the fabric of 1886 Peace Treaty as the Modakeke leaders ran away from the peace venue, refusing to append their signatures and subsequently had to be bullied into signing the treaty. The position of Ede authorities is best summarized in the records of Prof I.A. Akinjogbin: They felt that the condition insisted upon by Ife was not too stringent to be accommodated. Indeed, both the Oluwo Lamuye and the Timi (Lagunju) of Ede as well as the lbadan authorities thought they had enough clout to persuade, indeed command, the Modakeke to move. The Timi said he would ask those of them from Ede to come back home and they would obey. The Oluwo said they could all come and live in his town. No one thought that the Modakeke would in the end prove adamant.” [8]

Even when the 1886 Peace Treaty failed to resolve the Modakeke Question, the ‘Offa Question’ and the Ijebu imbroglio, Timi Lagunju continued to liaise with the Oluwo of Iwo, Ibadan authorities and representatives of the Lagos Government towards finding a lasting solution to the seemingly unending crisis. In fact, Governor Alfred Moloney’s commissioners, H. Higgins and Oliver Smith, had to spend some days in Ede in March 1890.” The party later left Ede for Oyo in pursuit of the peace mission. In fact, Timi Lagunju appeared to have totally agreed with the Ibadan terms of peace as the peace declaration of May–June 1890 tended to suggest. Johnson attests thus: … This declaration was to be signed (by the Alaafin), also by the Oluwo, the Timi of Ede, the Bale of Ogbomoso and the Aseyin of Iseyin. On the l0th of May, the writer (Johnson) accompanied by Obakosetan started with a copy of the declaration. The Oluwo signed it on the same day, the lbadan Chiefs at Ikirun signed it on the 16th, the Timi of Ede’s signature, the Ibadan Chiefs thought it was not necessary, being a subordinate chief to lbadan and what the Balogun of Ibadan signed was enough for him…. The Aseyin amidst the excitement of the Dahomian invasion signed the declaration on the 2nd of June, 1890.[7]