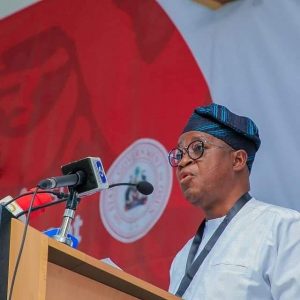 The Osun State Government has reaffirmed its commitment to build a virile and robust economy that will be the pride of the citizens and residents of the state.

The government said that no stone will be left unturned to move the state from a civil service state to a regional commercial and industrial hub.

This was disclosed on Tuesday at the press briefing heralding the proposed Economic and Investment Summit, held at Ideal Nest Hotel, Osogbo.

Osun Economic and Investment Summit is scheduled to hold between November 19th and 21st, where over 1000 participants are expected to attend.

Addressing journalists, the Chief of Staff to the Governor, Dr. Charles Akinola, who doubles as the chairman of the Summit Planning Committee, flanked by other committee members like the Deputy Chief of Staff, Prince Abdullahi Binuyo; Commissioner for Information and Civic Orientation; Mrs Funke Egbemode; Commissioner for Economic Plann‎ing and Budget, Prof. Olalekan Yinusa and Special Adviser to the Governor on Education, Mr Jamiu Olawumi, said the Summit was put together in furtherance of the Governor Adegboyega Oyetola’s commitment to turnaround the socioeconomic and political fortunes of the state.

He said the government was resolute to tap and properly harness the huge economic potentials and opportunities in the state to the entire world.

The Chief of Staff said the proposed Economic and Investment Summit was aimed at driving home the state’s Development Agenda, which primarily is to sustainably reposition the economy of the state and deliver prosperity to the people.

Akinola further revealed that the state would use the platform to present the government’s economic roadmap and showcase investment opportunities within the state to both Nigerian and international investors.

He noted that the Summit is in fulfilment of the promise the governor made during his swearing in, in November last year, where he promised to hold an Economic and Investment Summit, to drive the economy of the State.

He said the Summit will help to develop a strategic roadmap that will help to boost the Internally Generated Revenue (IGR) of the state.

“This is going to be a platform where the state will be looking inward to grow the immense economic potential of the state and as well showcase Osun as a strategic location for industrialisation.

“We are going to look at the area of agriculture where cocoa economy will be revamped. This is going to be a paradigm shift in the annals of our economy as we want to change completely the mentality of being the civil service state to industrialised and agro-economic state. We have the ecological advantage to advance our economy. We want to become a regional commercial hub.

“We have mining assets which if properly harnessed can help to boost the economic potentials of the state. We want to regulate the sector for the benefit of the people and the state. Already, Osun is officially on the global mining map.

“We also want to look into the tourism sector by developing our tourist sites. We are looking at eco-tourism through exploration of the economic potentials at Osun Grove, Olumirin Waterfalls, Opa Oranmiyan tourist site in Ile-Ife and the state’s textile economy. We will revitalise the economy around these assets.

“Osun has been known as a regional hub for commerce. People then, moved from far and near to Osogbo to buy and sell. So, we are going to reactivate this for the benefit of the state and her people. We are glad that we have aggressively developed infrastructure. Our infrastructure renewal will go a long way to achieve this aim. Since our state is among the safest in the country, we will also also market that to attract investment and investors “, he added.

Sent from Yahoo Mail on Android

Osun State Governor, Adegboyega Oyetola, on Monday presented the Performance Charter to the newly-inaugurated members of the State Executive Council as a tool to measure and justify their performances in their various ministries.

He said the Performance Charter has been carefully drafted to provide the clear-cut space and platform for all cabinet members to deliver on their valued contributions to the time-constrained work before them.

Oyetola spoke shortly after the new cabinet members took the Oath of Secrecy and thereafter signed the Performance Mandate at the EXCO Chamber, Office of the Governor, Osogbo.

He called on the cabinet members to discharge their commitments in a most efficient and prudent manner that would help the state to actualise her dreams of becoming the pacesetter in all sectors of the economy.

“Again, we must note that we can only go so far to deliver on our vision, if only we work and walk together as a team and an indivisible force.

“We must at all times avoid the temptation to work in silos and put up a one-man show that can prove manifestly inimical to our goal of cohesive team-building.

“Importantly too, we must seek to make actionable the deliberations and conclusions reached during our cabinet meetings, and institutionalise them.

“A sure way of achieving this, especially in line with the spirit of the Ada Declaration, is to sustain and deepen the tempo of relationship between us and our hardworking bureaucrats, and also ensure debriefing sessions are constantly held with all MDAs.

“We cannot afford to walk alone without the assuring partnership of the state bureaucracy”, the governor said.

Describing the cabinet meeting as a valuable instrument towards the actualisation of the state’s set objectives, the governor called on the new cabinet members to see the weekly EXCO meeting as an important platform to generate, exchange valuable ideas and brainstorm on the best ways of implementing the government’s Developmental Agenda for the good people of the state.

“As I have noted repeatedly since your appointment, failure is never an option to be contemplated. As for me, I feel very hopeful and excited, knowing the calibre of the human capital and goodwill available in this council, as represented by you all – who, without doubt, are among our state’s most distinguished, experienced and accomplished citizens.

“Certainly, ours is a great team, immensely endowed with all it takes to put our state on the pedestal of assured and irreversible economic prosperity, ” Oyetola added.

Briefing reporters shortly after the meeting, the Commissioner for Information and Civic Orientation, Mrs. Funke Egbemode, said the council deliberated on the need for every member to work towards the actualisation of the state’s Developmental Agenda, by keying into the four pillars of the State Economic Plans.

The pillars are: economic and human capital development, security, infrastructure and environmental sustainability.

She added that the council also deliberated on the forthcoming Osun Economic and Investment Summit, which has been scheduled to hold from November 19th and 21st this year.

Fasanmi to AKOL: Don’t Betray Your Integrity … congratulates him on his appointment.