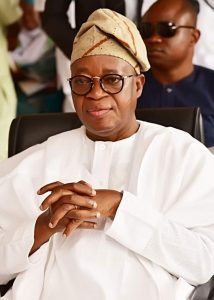 The Osun State Governor, Adegboyega Oyetola, has challenged government and stakeholders at all levels to promote those things capable of entrenching democratic tenets and good governance.

He asserted that for the nation to attain its desired goal of being the Africa’s leading light, stakeholders must latch on the ‘message of change’ to take the nation to the ‘Next Level’ of socioeconomic, political and infrastructure development.

Oyetola who was represented by his Chief of Staff, Dr. Charles Akinola, advocated youths and students’ active participation in politics, noting that the nation’s democracy could only be sustained with the effort of all.

The governor itemised seven pillars that could help guarantee good governance in a democracy.

He gave the pillars as: free, fair, credible and peaceful electoral process; Rule of Law; Judiciary; Legislature; Civil society; an educated citizenry and the media that will hold government accountable at all times.

“The existence of these seven pillars will ensure emergence of the will of the people and the best candidates, institution building, delivery of justice, equitable service delivery, reduction of tensions and their easy management when they occur and enhance social integration.

“Emplacing these pillars in a developing nation like ours is a collective responsibility, which requires government to take the lead”, Oyetola stressed.

Describing students’ unionism as a veritable tool for the youths to learn the rudiments and rubrics of democracy, the governor commended NAOSS leadership for coming up with the programme.

He urged other students’ groups and Civil Society Organisations to be alive to their responsibility of reawakening the people’s consciousness towards the maintenance and sustenance of the nation’s democracy.

“Student unionism is the microcosm of governance. It is the avenue for youths to learn the rudiments and rubrics of democracy.

“Efforts must therefore be made by all students to get involved in politics at this training level and apply the seven pillars as a basis for delivering good governance, public security and economic development.

“All stakeholders must constantly organise seminars and workshops to interrogate issues that will strengthen our democracy, good governance and public security in the interest of the nation”, Oyetola said.

In his remarks, the National President, National Association of Osun State Students, Comrade Oderinwale Elisha, said the lecture was put together to reawaken the people’s consciousness on the need to key into things that could advance the nation’s democracy and good governance.

Elisha who said the lecture would serve as a ‘wake-up call to duty for every citizen’, said the theme of the lecture was carefully chosen in view of the present state of the nation’s democracy and the quest to promote good governance.

He commended the administration of ‎Governor Oyetola for being supportive of the youths, particularly students since assumption of office.

Plot to smuggle Maina out of custody foiled….