Popular Posts
Osun governor to present 2021 budget to the...
Late Alhaji Ayinla Omowura,the untold story of a...
June 12: A milestone for Democracy By Asiwaju...
BREAST SUCKING; IS BENEFICIAL FOR ADULTS.
COVID-19: The full text of governor of the...
Gists

COVID-19: We are determined to contain spread -Oyetola .as Ooni donates motorised fumigators.

COVID-19: We are determined to contain spread -Oyetola

The Osun State Governor, Adegboyega Oyetola has said his government would spare no effort in tackling the spread of the Coronavirus in the state. 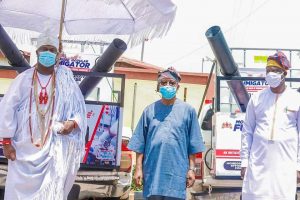 He said his administration was committed to employing the necessary technology and creativity to prevent community spread of the virus.

This was even as the Ooni of Ife, Oba Enitan Adeyeye Ogunwusi donated Motorised Modular Fumigators to support the efforts of the state in containing spread of the virus.

The locally fabricated Fumigator, converts liquid disinfectant to fog and it is used to fumigate large areas. It destroys viral elements in the environment and it has no harmful effect on human health.

Speaking during the presentation of the device at Government House, Osogbo, Governor Oyetola, said the administration had been working round the clock to forestall the community transmission of the disease, adding that this is reflected “in the appreciable and professional manner the state has been managing the menace.”

He lauded the Ooni of Ife for coming to the aid of the state at the point of need, saying the support would go a long way in the effort to eliminate permanently the effects of the virus.

The governor who personally received two of the Motorised Modular Fumigators donated to the state by the monarch, promised to replicate the use of the device at the local levels. 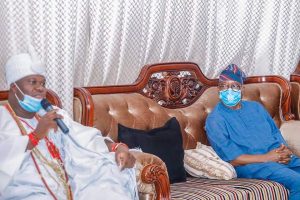 “I must thank His Imperial Majesty for this gesture, this is coming at a time when everybody in the whole world is looking for solutions to the pandemic. We have seen this as a creative way of dealing with such a situation as we have been told that the device can also be used after COVID-19 for agriculture and industrial purposes.

“So, I must commend this initiative and express gratitude to our monarch for the gesture. His creativity is something that is worthy of emulation.

“We want to assure that we will make use of the facilities as demanded and we shall ensure proper maintenance of the technology and replicate it in all our local governments”, he said.

Earlier in his remarks, the Ooni of Ife, Oba Enitan Adeyeye Ogunwusi, lauded the proactive measures of the state government in tackling the pandemic.

He said the decision to come up with the innovation was informed by the devastating nature of the pandemic.

Oba Ogunwusi who announced that that the technology could also be used for agriculture and industrial purposes, said “my joy is to let our dear Governor and the entire world know that indeed necessity is the mother of invention”.

He added that the gesture would be replicated in other states of the federation particularly in the Southwest region.

The monarch who enjoined the citizens to contribute their quota towards the development of the country said, “If we all task ourselves in this country, a lot of things will emerge”.

In his remarks, the Commissioner for Environment and Sanitation Engr. Sola Oladepo, assured of proper maintenance of the device, saying the gesture would help complement government’s efforts to contain the spread of the virus. 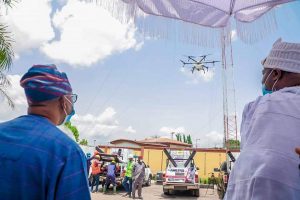 On his part, Special Adviser to the Governor on Environment, Mr. Rufus Oyegbile, noted that the device would be appropriate for large gatherings, including market places.

Palliatives and misplaced sense of entitlement By Sola Fasure.