Popular Posts
The Story Of Attah Ameh Oboni – the...
The state of Osun Anthem,Yoruba and English.
Teju is a Natural Leader – Rauf Aregbesola.
The Biography of the Alaafin Oyo his imperial...
Opon Imon (Tablet of Knowledge)Read this carefully from...
Politics 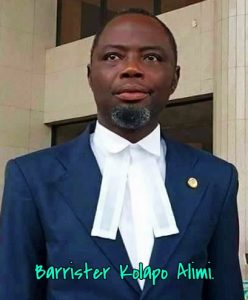 There have been series of accusations and counter accusations on how Barr. Kolapo Alimi emerged in Erin Osun. In order to set the record straight, this is the true picture of the scenario.

APC Party Chairman in Irepodun South, Erin Osun, Hon. Rufus Oyegbile constituted a committee to select a candidate for this nomination. The committee received application letters from 6 aspirants including Barr. Kolapo Alimi. The fourteen-men committee conducted an election, out of which Alimi had 12 votes, two persons are indifferent.

The committee appended there signatures but Oyegbile and one Adeyi refused to sign. After all their antics yielded no success, on getting to the federal constituency office with no other alternative; they signed the communiqué that produced Kolapo Alimi.

It is imperative to remind ourselves that Ifon has House of Rep member, Ilobu has an House of Assembly member and Erin Osun has non. This is common sense, Ifon people are very sincere; they conceded the position to Irepodun. In Irepodun what is expected is for Ilobu candidate to concede the position to Erin Osun but to our dismay some unscrupulous elements in Erin Osun, who didn’t know when the EPU and Kolapo Alimi are working assiduously for the realisation of our council wanted to sell this position to Ilobu for personal interest. This set of ingrates are currently reaping from where they didn’t sow through the legacy of Alimi.

It is pivotal to let the public know that no election took place at federal constituency office as against the rumour being circulated on social media that Jare Adebisi emerged against Kolapo Alimi. They wanted to conduct an election but the delegates from Ilobu are more than Erin Osun. So how can we allow them to conduct that type of election? Zoning was used in picking both House of Rep and Assembly members in each town. Why must Ilobu be contending this position with us? When they wanted to pick their candidate for House of Assembly, Erin Osun was not called to vote for their candidate. Why are they dragging this with us?

We believed in the discretion of our party hierarchy to do justice. Mr. Governor and other stakeholders should allow fairness and equity to prevail.

Finally, we want the whole world to know that, today politics in Erin-Osun is about Barr Kolapo Alimi, he was the one who worked tirelessly for the success of APC in Erin-Osun. To those who are saying Barr Kolapo Alimi concentrated all his efforts in Erin-Osun and they are angry because of that, are there no political office holders in ifon and Ilobu ? Why couldn’t they concetrate their efforts in their town, so as to win their town for APC? For example, there is chairman Oodua Group of companies, in Ilobu, there was SSA to the Governor on MDG, in Ilobu, there is Special Adviser, for Governor’s office, member of the state Cabinet, in Ilobu, there was Honourable member, state House of Assembly, in Ifon, there was, Special Adviser, member of the state Cabinet, in Ifon, there is state legal officer of APC in Ilobu and there is state Ex officio, in Ifon. None of these people could win a single ward for APC in either Ilobu or Ifon during the general election. The essence of spreading political office is to enable each community to reap the dividend of democracy through their representatives in government.
We urge our people in Ilobu and Ifon to always promote actions that will unite us not the one that will divide us. On this note, the few Ilobu indigines, not all, that are saying that, Ilobu should have both Honourable member of the state House of Assembly and the Commissioner to the detriment of Erin, are not promoting unity but rather they are dividing us. A word is enough for the wise.