Governor Gboyega Oyetola has observed that the nation is under policed and the result is that the force is overwhelmed by criminality.

The Governor made the observation in Ibadan at a regional security summit at the instance of the Inspector General of Police, Abubakar Adamu.

Mr Oyetola counselled the police to change strategy in recruitment since different communities have their peculiarities. 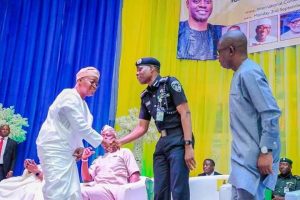 According to the Governor,the police can recruit from communities, train them and deploy them in their areas since they understand the terrain.

Mr Oyetola commended South West Governors for putting politics aside but collaborate with each other for a more secure South West.

Earlier the Inspector General of police Abubakar Adamu had made a case for communal unity to ensure a safer region and nation. He described community policing as a potent weapon to tackle crime.

The host Governor, Engineer Seyi Makinde called for a synergy among different security agents deployed in each state. He and the Governor of Lagos State subscribed to the deployment of technology to help the police fight crime .

Governors of Lagos Ogun Ekiti and Ondo who represented their Governors pledged to support the resolution of the summit earlier held on the 25th of June by the DAWN commission and the new one at the instance of the IGP.

The South West security meeting also brought together top flight monarchs such as the Ooni of Ife, the Alake of Egbaland, the Olubadan of Ibadan, the Owa Obokun of Ijesaland,Oba and the Ataoja of Osogbo among others as well as Otunba Gani Adams,representatives of the Hausa and Igbo Communities giving goodwill messages.