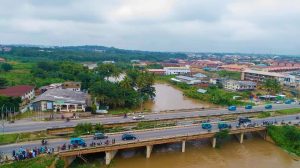 Governor Adegboyega Oyetola of The Sate of Osun has asked those residing in flood-prone areas to take necessary precautions to avoid loss of lives.

He gave the admonition following the torrential rainfall in the state that resulted in the overflow of Osun River, as a result of which some areas within the state capital were flooded.

In a public service announcement signed by the Chief Press Secretary to the governor, Ismail Omipidan, the governor said the government is already taking measures to further dredge the River.

Declaration of Rivers as Christian State- To God Be the Glory! –by Umar Ibrahim Tafida