Be Ready For More Work – Aregbesola charges workers under his ministry.

Be Ready For More Work – Aregbesola

The newly appointed Minister of Interior, Ogbeni Rauf Aregbesola, has told workers of the ministry to be ready for work.

Aregbesola who visited the ministry shortly after he was inaugurated and assigned a portfolio alongside others by President Muhammadu Buhari in Abuja, on Wednesday promised a healthy working relationship urging the staff of the ministry to brace up for the challenges ahead. 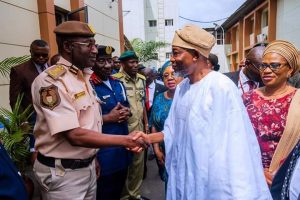 The former Governor of the state of Osun stressed the need for all to be up and doing to deliver on the mandate given him by the President.

Aregbesola instructed the Permanent Secretary in the ministry, Georgina Ehuriah, who had been in charge since the dissolution of the last cabinet, to continue running the ministry until Monday when he would formally take over. 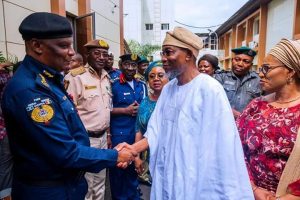 “I will come to take over on Monday. I give the Permanent Secretary the grace to run the ministry till then. We will be ready by Monday to take on the huge assignment,” the minister stated.

He assured the staff of the ministry and personnel of all paramilitary agencies under the ministry of purposeful leadership while urging them to be ready for more work as he would be demanding much more from them.

He stated, “I promise you a realistic, reasonable and commendable leadership.”

Earlier in her speech, Ehuriah said the ministry needed “a focused person like you (minister)” to lead it on account of its strategic position in the security architecture of the country.

She said the proper handing over ceremony would take place on Monday.

OFFICE OF THE VICE President – PRESS RELEASE PRESIDENT BUHARI APPROVES RE-APPOINTMENT OF ADE IPAYE AS DEPUTY CHIEF OF STAFF, OTHERS