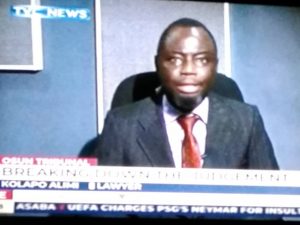 God created human beings with different traits and characteristics. Trait is what manifest into our attitudinal behaviors. This manifestation can either be negative or positive, good or bad, Godly or ungodly. Genes constitute traits, traits constitute character and character is the outward display of ourselves.
The creation of gene that manifest into embodiment of personality called Kolapo Alimi is a special and ingenious one. This is a man who prefers to deny himself personal benefit in order to satisfy the yearnings and aspirations of constituents. I remembered an encounter with him, when asked: why he is not living ostentatiously like some of his contemporaries? He replied; ” I cannot do that when people around me are yet to live above poverty line “. He preferred to live moderately and if there is any excess; he will share it among his constituents. That is a sign of an altruistic leader.
It is fundamental to know that before he joined politics, he has involved in a lot of humanitarian services and he has rendered community services. His first political appointment as a commissioner for Local Government and Chieftaincy Affairs in 2012 is a divine reward for his commitment to humanity. Though a litmus test which he passed and earned him reappointment in 2017. There is no doubt that while in office, administratively he engineered a lot of innovations in his ministry which earned him several awards. Politically his contributions to his constituency is unquantifiable, ranging from provisions of employment opportunities, elevation of two Obas in his local government, community development, facilitation of schools and fire service station in his constituency and many more.
There is no doubt, Kolapo Alimi is an embodiment of struggle, dedication, commitment and loyalty. The recent supreme court judgment that upheld the victory of Oyetola has said it all. When the tribunal gave PDP victory, he was the only lawyer that stood on his feet at this challenging moment. He sensitized the whole world on the perverse nature of tribunal judgment and assured supporters on victory at appellate courts. He granted interview on majority of indigenous Media Stations in Osun, TVC Channels TV etc. All these struggle were borne out of his personal purse.
From the foregoing, without iota of doubt, If all is down, Barr. Kolapo Alimi is a character that can stand and defend a course to the last pint of his blood. He has been tested and trusted.