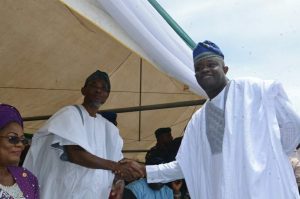 Engr. Remi Omowaiye, the Commissioner for Innovation, Science and Technology in Osun, has described Gov. Rauf Aregbesola as a symbol of good governance for upcoming generations.
Omowaiye told newsmen on Tuesday in Ibadan that the governor had promoted growth and development in the state.
He also described as laughable the threats by the Peoples Democratic Party (PDP) to take over in Osun in 2018.
Rauf Aregbesola
Highlighting Aregbesola’s achievements, he stated that the school feeding programme of the administration had increased primary school enrolment by 60 percent.
Omowaiye said the Osun Youth Empowerment Scheme (OYES) as well as massive road and school infrastructure projects had become models for other states.
“Unfortunately, the governor has been circumstantial victim of misrepresentation and orchestrated media attack.
“It is on record that the SUKUK loan which was used as part of the re-engineering tool in the state has become a template for the Federal Government now despite the widespread criticism against the noble idea.
“Even some European countries have become beneficiaries of the loan too after Osun,’’ he said.
He said the bailout fund given to the state was transparently and judiciously spent on the payment of salaries and pension to state and local government workers as well as OYES cadets.
The commissioner stated that the state was given a clean bill by the Independent Corrupt Practices Commission after investigation of alleged diversion of bailout funds and Paris Club refund.