The youths of Ara in Egbedore local government area in the state of Osun hold peaceful rally in support of the new monarch His royal highness Oba Olubayo Windapo today in the ancient town.

The youths who are chanting solidarity songs in support of the new selected king enjoined the state government of Osun to expedites action in presenting the staff of office to the new monarch  as the non filling of the vacant Alara stool since almost ten years now has been affecting the development and progress of the town and now that the kingmakers have been unanimous in their decision in chosen the new monarch according to the youths of the town,what next is for the state government to issue the staff of office without further delay.

Today being the market day in the town was a special day as the people of the market are seeing jubilating and singing solidarity songs in support of the new monarch when the procession reached the place. 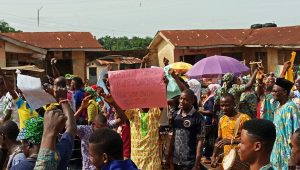 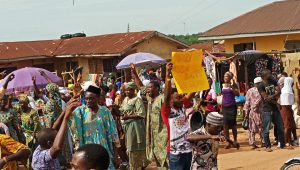 The placards carrying youths are chanting solidarity songs in support of the new monarch, the inscriptions on the placards reads “After 18-0 what next” “We have chosen our king in Windapo” “Olubayo is our choice’ among others.

The peaceful rally was conducted round the town with the security agents seeing trailing them behind so as to prevent break down of law and order.

LAUTECH: THIS PARTNERSHIP IS LOPSIDED, IJESA GROUP FUMES. …advises Osun to hands off and share assets.