Kwara APC governorship candidate AbdulRahman AbdulRazaq has rejected suggestions by the state government that his campaign slogan, “Otoge” (enough is enough) could spark political unrest or suspicions in the state. 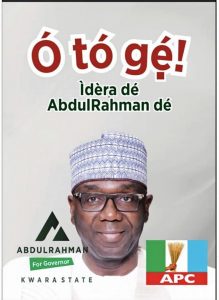 In a statement made available to our correspondent in Kwara on Sunday, AbdulRazaq said the campaign slogan was properly vetted and approved by the Advertising Practitioners Council of Nigeria (APCON) which he insisted was the only statutory and non-partisan body that should do so.

“Our OTOGE slogan simply means that our people have had enough and are desirous of change through the ballot box,” adding that the government was only jittery and trying to crackdown on the opposition.

“We are surprised and disappointed at the action of the Kwara State Government and Kwara State Signage and Advertisement Agency (KWASAA) over their threat to pull down our billboards and campaign banners or posters that have this slogan. 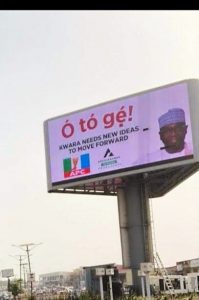 “If, despite their underwhelming performance in the past 14 years, the Kwara State Government and its patrons do not find their slogan of ‘continuity’ as contemptuous, provocative and utterly insulting to the people of Kwara State, it is quite annoying for them to complain that the opposition is saying #Otoge and calling for a change.

“We totally reject Governor Abdulfatah Ahmed’s hypocritical statement of Friday December 7 in which he claimed that our campaign slogan was capable of pitching people against one another.

“We also reject KWASAA’s claim that complaints have come from the Emir of Ilorin’s palace regarding the slogan. These are cheap lies with which our people are not only familiar but are totally fed up!

“We urge the Kwara State Government and its agencies to face governance, stop their boring propaganda and face the unavoidable prospect of being voted out of office in March 2019, God willing.

“Contrary to the sheer red-herring by the governor, we are in a better position to advise the Kwara State Government and the People’s Democratic Party to please embrace peace, to live and let live.

“We urge independent government agencies of the Federal Government, including APCON, police, the department of state security, to continue to be apolitical and professional in their dealing with politicians.

“Finally, our campaign has been very peaceful, orderly and issues-based. We promise that it will continue to be so. But while using this opportunity to again urge our supporters to eschew every form of violence or disorderly conducts even in the face of unprovoked attempts to cage the opposition, we believe that our people have seen enough of deprivations, mediocre governance and mismanagement of public resources to say it loud and clear that enough is enough. OTOGE!” the statement read.