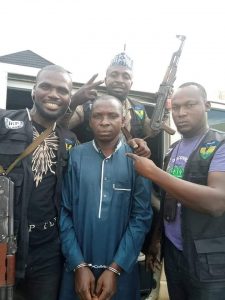 – Suspected kidnap kingpin, Alhaji Hamisu Bala, aka Wadume, has denied being a kidnapper but admitted supplying arms to kidnappers

– Wadume also said that he was a political thug, adding that he defrauded many politicians in 2018 on the pretext that he spiritual powers to help them win elections

Suspected kidnap kingpin, Alhaji Hamisu Bala, popularly known as Wadume, has opened a can of worms about his real personality, profession and alleged involvement in the Nigerian politics, particularly in the buildup to the 2019 elections.

In an interview published by Vanguard on Saturday, August 24, Wadume denied being a kidnapper.

He, however, admitted that he has supplied arms to many kidnappers. Wadume added that he is a political thug and a fish farmer.

“I am not a kidnapper, but I have sold arms to several kidnappers. I am a fisher farmer, I own fish ponds, I own a transport business. I am equally a political thug. I went into crime when some politicians came for me, they approached me through one Babangida Musa, who was also into fishing business,” he said.

The suspected kidnapper also claimed the he got N13 million from the ruling All Progressives Congress (APC), and six million naira from an unnamed sitting governor.

Explaining further, Wadume said he deceived many politicians in 2018 by claiming that he had spiritual powers to enable them win their elections.

His words: “I got N6m from a sitting governor, N13m from APC, defrauded civil servant of N30m, In June 2018, I deceived a lot of politicians who were vying for political offices that I had spiritual powers to enable them win their elections.

“I defrauded the governor when he came to Ibi and met the youths in my town. As the leader of the youths, the governor met me and I promised to work for him and to also consult some Mallams who would pray for his success.

Wadume explained that the N13 million he allegedly got from the APC was to be used for the 2019 presidential elections.

However, Wadume, who contested the Taraba state House of Assembly election on the platform of the Young Democratic Party( YDP), Ibi local government, said he eventually pulled out of the election and took his supporters to the Peoples Democratic Party (PDP).

“I was also given N13 million by the APC to prosecute the 2019 presidential election but I spent only seven million. I also defrauded a civil servant from Ibi of N30million. I contested the Taraba state House of Assembly under the YDP Ibi local government but I pulled out of the election and took my supporters to the PDP,” he said.

Recall that the the Nigeria Police Force re-arrested Wadume in his hideout at Layin Mai Allo Hotoro area of Kano state in the late hours of Monday, August 19.

Politicians are the ones behind banditry – Ex-police chief says
When Wadume was first arrested, he was being driven to Jalingo by the police team when soldiers opened fire on them along Ibi-Wukari road, killing three police officers and a civilian.

Earlier, Legit.ng reported that police detectives allegedly recovered many guns from houses belonging to Wadume in Ibbi and Jalingo in Taraba state.

The police reportedly recovered several AK 47 and other weapons in the houses of Wadume in Ibbi and Jalingo following a search conducted by the detectives.

An anonymous source suggested it might be Wadume that revealed where he hid the guns to the police after he was re-arrested.

Aregbesola is a perfect fit for interior ministry; Biyi Odunlade.