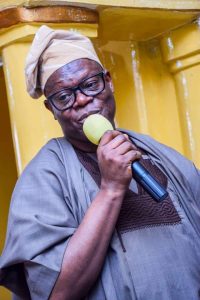 The Senator representing Osun Central Senatorial District in the National Assembly,Dr Ajibola Basiru has congratulated the Ataoja of Osogbo,Oba Jimoh Oyetunji Olanipekun,Larooye the second on this year’s Osun Festival.

In a message from his Media Office,Senator Basiru extended the greetings to the Ataoja in Council,Osun priests and pristesses and the entire indigenes of the town on the occasion of the annual Osun Festival.

The Chairman,Senate Committee on the Diaspora NGOs and Civil Societies observed that celebration of Osun Festival is now more of culture and tradition beyond idol worship.

The statement reminded people that Osun Grove has become a World Heritage Site like other places around the World.

According to Senator Basiru, the grove now generates revenue for Osogbo as tourists troop in from around the World not to worship anything but to appreciate the Wonders of Nature.

Senator Basiru appreciated Governor Gboyega Oyetola for his positive disposition towards Osogbo at all times as a reflection of the support the progressives enjoy from the State Capital.

He therefore called on the indigenes of Osogbo to strengthen the support with payments of taxes for further development.

CATHOLIC CHURCH COMMENDS OYETOLA ON ATMOSPHERE FOR DIALOGUE, DESCRIBES OSUN GOVERNOR A DEMOCRAT. OLUWAMAYOWA A. FAGBOHUNGBE OFFICE OF THE GOVERNOR OF OSUN